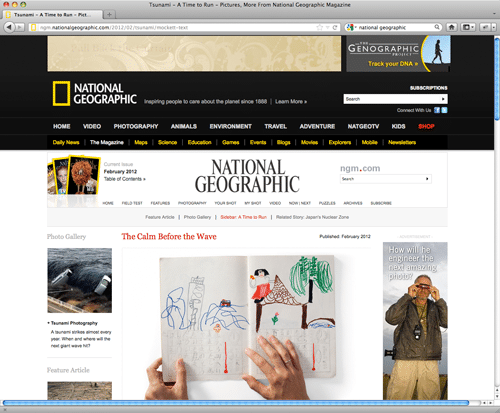 From time to time, Sessions College faculty achieve something extraordinary and we like to toot their horns. In that category, Sessions College English Composition instructor Marie Mockett has an article published in this month’s National Geographic Magazine.

An American with a Japanese mother, Marie Mockett is a novelist and nonfiction writer with strong ties to Japan. In the aftermath of the earthquake and tsunami that hit northeast Japan in March 2011, Marie was asked to write several articles about the disaster and recovery efforts, publishing an op-ed in the New York Times, an article in Glamour Magazine, and appearing twice on NPR to talk about the event.

In fall 2011, Marie was asked by National Geographic to write a literary piece to accompany a scientific discussion of tsunamis. True to the magazine’s mission, National Geographic even sent her to Japan to research the article, though the piece ultimately focused on her childhood memories of the area.

“It’s a tremendous honor to get a call from National Geographic,” commented Marie. “The Japanese people are amazing. The National Geographic issue has many photos that demonstrate the speed with which people are cleaning up. And there are lots of stories about how strangers banded together to help each other.”

“But the tsunami has also laid bare many of the challenges that Japan will face moving forward. How will the towns surrounding the tsunami zone rebuild? How far does the radiation contamination spread? How will Japan provide its citizens enough power? And in a way, these are questions that we all ask, because we all want to reap the benefits of modernity, while remaining safe and healthy.”

The article can be read here: http://ngm.nationalgeographic.com/2012/02/tsunami/mockett-text.

Advisory Board Sessions: Adapting to the Web Design Industry Today