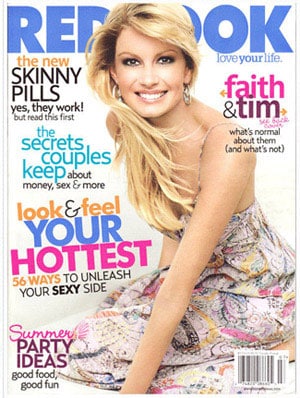 In case you’ve ever wondered what’s in a day’s work for professional photo retouchers, the folks at fashion blog Jezebel.com have something they’d like you to see. In an effort to debunk fashion editorial mags’ unrealistic standards of feminine beauty, they offered a $10,000.00 reward for the person who could submit the most egregious example of Photoshop-generated perfection used on a magazine cover. The winner was an astonishing, but totally typical, Redbook magazine cover featuring country singing star Faith Hill. The 39 year-old mother of three is genetically blessed to begin with, but in order to be considered cover-ready, a photo retouching whiz had quite a project of it.

There’s been a lot of controversy as to how much retouching is too much, but as Ken Milburn, photographer and faculty in the Sessions Online School of Design Digital Arts Program, points out, “it’s the same principle for car photos in a car ad. We can take it for granted that no model of that car, no matter how carefully washed, polished, and accessorized, is going to look as good as the photograph in that ad. That’s true even if it’s a photograph of a Range Rover conquering a muddy swamp. You can bet that it will be the best-lit and grittiest mud you ever saw—if an extra blob or two is needed, it will be placed there—maybe even with a little sparkle added to it.” However, the caveat in this pursuit of commercial perfection is that the photo retoucher must not erase the valuable commodity of the photo subject’s identity, even while making, in the case of this Redbook cover, some drastic changes.

So, controversy aside, what actually went on in the Photoshop magician’s studio to produce this Redbook cover? We don’t know the editor who worked on this photo, but to help imagine what the process might have been, Ken Milburn gave his professional opinion of what was done to the original image in order to turn it into the cover image, and which Photoshop tools were probably used. He asks you to please note, however, that Photoshop typically provides us with many ways to skin the same cat:

Before and after extensive retouching—are you impressed or appalled?

1. The top half of the background was removed by using the Extract filter and then a white layer was placed beneath the newly transparten portion of the layer. Clone and Brush tools were then highly feathered and used to “blend” the various shades of into one another so that the shift in colors and shades became seamless so that they wouldn’t compete with the text that had to go on the cover.

2. The Patch tool was used to remove the wrinkle under Faith’s eyes and the heavy shadow under her left clavicle. This took no more than five minutes.

3. A portion of Faith’s right arm was Extracted from a duplicate of the main layer and the extraction placed on a layer below her right side. Her right hand was then Cloned away and Erased away.

4. Faith’s entire body was extracted from the background and placed into the Liquify filter, where it was stretched and re-shaped, so now she appears to be sitting up straighter and her arm seems longer and more graceful.

5. While still in the Liquify filter, re-shaping tools were used to eliminate the back fat, slim the waist, and curve the fanny.

6. Once the body looked good in the Liquify filter, it was brought back into Photoshop and standard retouching was done on skin details, eyes, lips, and teeth. The Spot Healing Brush removed all the little speckles and wrinkles. The interior of the eyes was selected and feathered and then adjusted with a Levels or Curves layer to whiten them (but not enough to make her look like a staring Goth witch). The same was done with her teeth.

7. All of Faith’s skin was made to look smooth, soft, and cuddly. This can be done in a variety of ways that produce very subtle differences. The favorite technique is to select all the skin, feather the selection to blend smoothly with its surroundings, and then copy the skin selection to a new layer. The new layer is then treated to a filter called Diffuse Glow and given a Blend Mode called Screen, which greatly brightens the contents of the layer…especially in the highlights. The result is usually a bit too dramatic, so the Screened layer’s Opacity is lowered so that some of the original skin shows through.

In addition to the Photoshop insights, Ken leaves us with some historical context: “There is absolutely nothing in any of this process that isn’t used to at least some degree in almost every professional glamour portrait. Advertisers and illustrators realize that the sales potential of glamorizing their photographs is the power that Photoshop and numerous “accessory programs” currently bring to the game. It’s only been about a decade since publishers and ad agencies depended on highly trained artists to literally re-paint the original using techniques that could perfectly fool the eye into thinking that everything in the picture was recorded by the camera. Since the primary tool was a miniature spray gun called an airbrush, this technique became generally known as ‘airbrushing.’ Magazine cover and advertising-class airbrushing could take days and cost thousands of dollars. Today, most of these jobs can be done in a few hours, and many in less than an hour.”

From the NoD Sponsor: