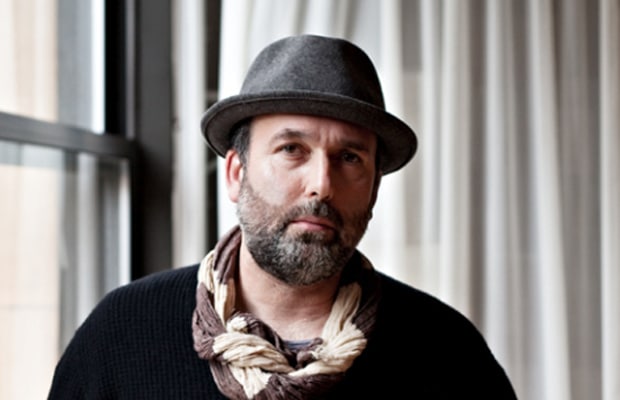 Doesn’t matter if it’s New York, London, Tokyo, or Rio. Our urban environment is defined as much by street art (graffiti, murals, and installations) as by commercial graphic art (signs, ads, and billboards). Walk around any downtown and you’ll see that some of the best art is just … lying around. Mysterious works of visual alchemy and anarchy appear overnight, oblique messages that are unsigned and evanescent, waiting to be picked up or erased by the elements or the day’s foot traffic.

Who creates street art? What motivates street artists and how do they make a living? Sessions Product Director Scott Chappell talked to Marc Schiller, co-founder of a street art organization called the Wooster Collective. A street artist by night, by day Marc is the CEO of ElectricArtists, a innovative marketing services company. Oh, and he is also a photographer of the world beneath his feet. An ideal tour guide for the urban world. . .

Q: I first learned about the Wooster Collective because I was trying to identify the artist that created a piece of street art I found in Soho. One day on lunch break I found this beautiful little 6″ x 10″ painting by Adam Neate leaning against a fire hydrant. I would never have known who created it if I hadn’t tracked down your site, which celebrates the diversity of street art. It really got me thinking: why would such an accomplished artist leave his work for any random person to pick up? Let’s start with this—why did you decide to form the Wooster Collective?

Marc: I didn’t plan it really. What happened was that my wife and I began working on some street art projects together on weekends, and to be honest, we began to lose track of who was doing what. We’d look back at old work and we’d say: “Did you do that one or did I?” Also, we worked together on a lot of artwork and it just made sense to thrown it all into a pot and share credit equally on most our work. In addition, I love the idea of Collectives, because far too much attention in art is put on the artists and not on the actual artwork. Collectives are cool because it’s all about the artwork and not about the artist at all. I like that. The Wooster Collective Web site we put together out of our love for street art. We thought it would be cool to document the diversity of stuff that is out there. It makes sense for people to capture what’s going on, because street art is by its nature ephemeral. It’s like wine. It’s not meant to last forever—it’s meant to be enjoyed and then disposed of.

The Wooster site is intended to preserve the art that people are putting up on the street… The site itself has no “plan” and is not intended to make money. There is no goal or objective for it at all. It’s not a business. I guess its agenda, if there is one, is to legitimize and truly celebrate an under-appreciated art movement.

Marc: Well, it’s certainly a sub-culture that’s attracted to the Wooster site. I think that in all walks of life people are looking for something authentic and fresh. Street art is both. There isn’t one kind of person or group that frequents the Wooster site. It’s very diverse. Artists, business professionals, gallery owners, writers—you name it.

Marc:Wow, that’s a great question. Banksy, an absolutely incredible stencil artist in England, is certainly one of the most respected amongst his peers for not only being a creative genius, but also having an incredible wit and for being extremely clever. Swoon, an artist in New York, is well respected for perfecting her craft, for her dedication, and for her passion. Dalek, another New York artist, is well respected for the precision of the line work in his drawings. Shepard Fairey is respected for showing that not only can you go “all city” you can also go “all cities.” Others that are getting their due props amongst other artists include Logan Hicks in LA, Revs in NYC, Freaklub in Barcelona, and Blek Le Rat in Paris. But there are many, many others.

Q: What would you say to critics of the movement? Is there a “message” to street art?

Marc:Absolutely. But there’s no single message that umbrellas the entire scene. Each artist has his or her own reason for doing street art. Most street artists, by placing art uncommissioned on the street, are making a statement that urban public spaces need to be reclaimed by the people who live in those spaces. Too much “space” in our urban cities is sold to advertisers and large corporations. Lots of people live in downtown areas in cities all over the world. Not everyone lives in the suburbs or in the countryside. Street artists are trying to reclaim a bit of their space, even if it means doing it without the approval of the people who control that space.

Q: What techniques do street artists use? What are the trends right now?

Marc:The most prominent techniques are graffiti, stencils, stickers, and wheat pastes. There has also been an emergence of three-dimensional pieces such as sculptures that are being attached to buildings and signs.

Q: What are the distinctions between graffiti and tagging?

Marc:I never did any graf or tagging so it would be unfair for me to sound like an expert on either of them. Tagging is more of a sport. Taggers try to get up on as many places as possible. For most taggers, it’s not about the art, it’s about the number of places you’ve tagged. Graffiti is about the art. It’s an art movement. Graffiti artists perfect their talent. Taggers perfect their ability to avoid getting arrested.

Marc:I think that debating whether an artist is “selling out” by doing something for money is, quite frankly, stupid and a complete waste of time. The ultimate goal of most artists is to pay their rent doing what they love the most, which is creating art. Artists should do whatever they need, or want, to do, to live as they desire, even if that means doing commissions for brands and having corporate clients. It’s not for me, or anyone else, to judge. Each artist should live by their own code of ethics and decide what is right for them.

Criticizing how an artist goes about putting food on their table and paying their rent is [sound of frustration]. Nobody wants struggle to pay the bills. “Going commercial” allows an artist to stop worrying about money and start worrying about their craft. The idea that the “struggling artist” is a romantic notion and that the struggling artist has more “freedom” is, to me, complete crap.

Q: How about the legitimate art space: is it difficult for street artists to land shows in galleries?

Marc: No, not if they’re talented. There’s an amazing gallery scene for young contemporary artists in New York and in cities around the world. Most talented street artists are doing gallery shows. Actually, right now there’s more opportunity for street artists to land shows in galleries than for non-street artists.

Q: Talking of contradictions, you started the Wooster Collective and yet you are also co-founder and CEO of ElectricArtists, a marketing services agency…

Marc:ElectricArtists is a marketing agency that I founded six years ago to better understand how brands can leverage word-of-mouth. We develop and implement strategies that create an environment for word-of-mouth to happen during for products and programming. We have clients in most of the media and entertainment sectors spanning film, video games, television, music, brands…

Q: Wooster Collective and ElectricArtists seem to be opposite ends of the cultural landscape, or are they? Do they complement one another in any ways?

Marc:They are indeed on opposite ends of the cultural landscape. But sometimes opposite ends are closer to each other then you might think. Like two ends of a string that meet in a knot. I’m not sure if ElectricArtists and Wooster complement each other as entities, but they do complement me as a person. I’ve planted myself in the middle of both sensibilities with my feet straddling each side—the fiercely independent mindset and the extremely corporate mindset.

Being “in the middle” is exactly the place I want to be! I don’t want to be typecast. I don’t want to be so in love with marketing and advertising that I lose my objectivity about art. And at the same time, I don’t want to be so much “the consummate artist” that I can’t see the merits of being involved with good advertising and marketing. By having my feet in two completely different sensibilities, I can see both sides more clearly. By being in the middle, I’m not on one side struggling desperately to look over the top of one to see the other. I like contradictions. I like ambiguities. I like grey as a color much better than black or white.

We started with the question: who creates street art? The answer seems to be: real artists with serious talent, many of whom have careers that span both street art and “legitimate” or commercial art worlds. Marc Schiller has profiled scores of street artists for Woostercollective.com, and each interviews starts with a series of questions he calls “The Vitals.” So to wrap up, we turned the tables on him:

Where do you now live? On the opposite coast from LA: New York City.

How long have you been interested in street art? I guess that it’s been a little over two years now—ever since I moved to Lower Manhattan.

What did you do last night? We held a salon at our flat in Soho. I drank some nice wine and met some terrific artists and designers.

What is your favorite thing to eat for dinner? Sushi. Sitting at a nice Sushi bar for me is one of life’s great pleasures—and at times one of life’s true indulgences.

What do you currently have in your pockets? Well, my pockets are actually pretty boring right now. Sorry about that. I currently have my mobile phone, my wallet, and my keys in them.

If you were given “more time,” what would you do with it? I would hope that I would do more of my own artwork but the truth is that I would probably waste a great deal of it. I try to do so much stuff now that it makes sense that I would spend most of the additional time relaxing.

Whom do you love? My wife Sara, Hudson our Weimeraner, and all of the artists who are out there putting their shit up.