Should You Really Keep Your Goals to Yourself? 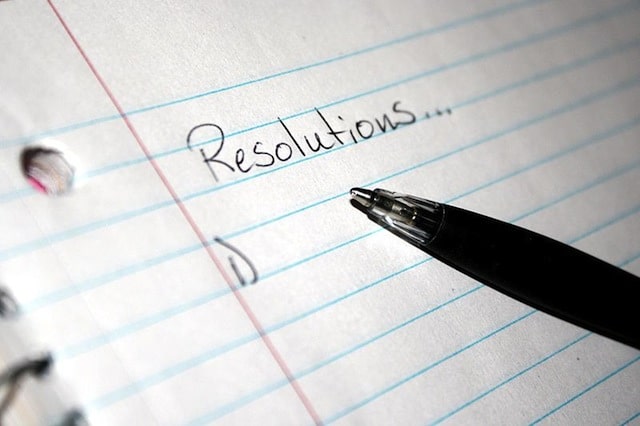 What are your New Year’s resolutions? Wait, no! Don’t tell me! (Image via Wikimedia)

We’re one week into 2015. Are you still writing 2014 on your checks? More importantly, how are those New Year’s resolutions coming along?

A few years ago, I was browsing Facebook and came across this somewhat infamous TED Talk by Derek Sivers, entitled “Keep Your Goals to Yourself.” The talk had a catchy title, and it was only 3-minutes long, so it met my primary criteria for web watchability.

It’s a great little talk, and if you haven’t seen it, I recommend watching it above.

The talk had a big impact on me when I first watched it. As a creative professional, I’d noticed that I was often falling short of my public goals. I’d share a blog or Facebook post like, “Working on a fun Flash game. Excited to share! Who wants to bug test?” Friends and family would respond, and I’d experience a surge of pride as I wrote down the names of willing playtesters. Then, as with any creative endeavor, sometimes I’d see the project through to the end and most times…I wouldn’t.

After watching Derek Sivers’ talk, I took the advice of “keep your goals to yourself” to heart. I no longer publish calls for playtesters until I’ve actually finished a playable version of a game. Likewise, if I set a goal to get more exercise or drink less coffee, I try not to go public with my intentions until I’ve actually made good them.

It’s a strategy that’s really worked for me, and I think it’s made me a happier, more productive person. But before I stand up on a soapbox, I want to take a deeper look at “keep your goals to yourself,” the research behind it, and what we can take away from the approach.

Sivers begins his talk by inviting the audience to take a moment to think about their biggest personal goal. He says:

Imagine telling someone that you meet today what you’re going to do. Imagine their congratulations and their high image of you. Doesn’t it feel good to say it out loud? Don’t you feel one step closer already, like it’s already becoming part of your identity?

It’s a short-lived moment of satisfaction, as Sivers then says:

Well, bad news: you should have kept your mouth shut, because that good feeling now will make you less likely to do it.

Ideally, you shouldn’t feel truly satisfied until you’ve actually achieved your goal—but when you share your goal with a friend, and your friend gives you a big pat on the back, you experience what psychologists call a “social reality:” the feeling that you’ve already made progress towards accomplishing your goal, whether or not you’ve taken any steps in that direction.

Scientific American addressed the concept in a 2013 New Year blog post, which includes a nice example about deciding to run a marathon:

Once you start telling all of your friends and family about this goal, “liking” the relevant pages on Facebook, and updating your statuses to indicate your training plans, you’ve created a public image of yourself as “someone who runs marathons.” . . . If you conceptualize this public commitment as a form of goal progress, you might actually become less motivated to pursue other goals (like actually training), because it will feel somewhat like you’ve already “done enough” for now.

Because of the feeling of pride and satisfaction you get just from talking about the goal, your brain tricks you into thinking the work is already done, making you that much less likely to complete the real work required to see your goal to the end!

In his talk, Sivers sites a few different pieces of research to support his claim, dating back as early as the 1920s:

1926, Kurt Lewin, founder of social psychology, called this “substitution.” 1933, Vera Mahler found, when it was acknowledged by others, it felt real in the mind. 1982, Peter Gollwitzer wrote a whole book about this and in 2009, he did some new tests that were published.

This a good starting place, but a 3-minute talk can’t delve very deep into its sources. Let’s take a closer look, restricting our research to sources that are easy to find on the web, and studies that aren’t hidden behind the ivy-covered cyberwalls of JSTOR.

A quick search online reveals a few good sources, which vary in quality. There’s a number of pages from Lewin’s A Dynamic Theory of Personality: Selected Papers (the scanned quality of the original source material isn’t great), an interesting doctoral research paper from 1950 on “interrupted and completed tasks,” and two separate research articles by Peter Gollwitzer, the author of the Symbolic Self-Completion book Sivers references in his talk (article 1, article 2).

Goal-setting guru Bassam Tarazi has written an interesting blog post about the talk, which doesn’t debunk it, but claims that the original source material has been over-simplified and improperly summarized.

The results of the specific study that Derek Sivers and Daniel Coyle are talking about, the one where people had 45 minutes to work on their goals, was using the data of only 30 law students who were committed to a career in law, not 163 people [the number quoted in Sivers’ talk].

The students never actually announced their goals to the room or shared their intentions aloud. Instead, half of the 30 students had responded anonymously to a questionnaire, which included the statement: “I intend to make the best possible use of educational opportunities in law,” and the other half of the students had their questionnaires reviewed and acknowledged by a researcher before the start of the assignment.

While the study certainly shouldn’t be discredited, it shows that facts can get lost in translation. When they’re available, it’s great to check primary sources!

If you’re looking for hard facts, the first takeaway is that TED Talks aren’t the place to get them. While TED Talks are a lot of fun, the TED model (very effectively) uses soundbites to make you feel smart. It’s a great starting point for conducting your own research, but a 3-minute talk can’t deliver true expertise.

The final takeaway, in my opinion, is this: If you’ve struggled to achieve your goals after sharing them publicly, why not try keeping them secret? Rather than bask in the fuzzy warmth of good intentions, try waiting until you’ve actually accomplished your New Year’s resolutions before gloating to the world. Your resolve and determination will be a model to others, and you may secretly inspire someone else to pursue their own goals.