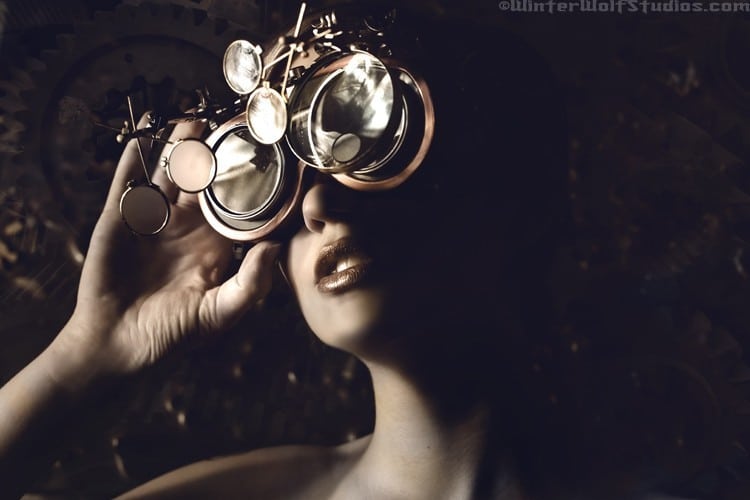 It’s the design trend that we all love and some love-to-hate: Steampunk.

Designer resource alert: if you love Steampunk as much as the rest of us, visit this handy design resource tutorial guide on all-things related to Steampunk. Creating detailed theme types/fonts, digital illustrations, and old-world effects in Photoshop – all part of the fun.

Lush layers, attention to detail, and ability to frame nearly any creative endeavor, be it aural, visual, artistic, engineered, edible or textural: Steampunk emerged mainstream in 2013 as a creative style, a fashion statement, a literary genre, and an excuse to wear goggles with absolutely everything. And let’s face it: who doesn’t want to wear goggles with absolutely everything?

Steampunk combines Victorian era fashion with some elements of steam-technology, science-fiction fantasy and sheer imagination. Take lace and ruffles, turn it inside out, wear a corset on top with goggles (for those velocipede rides) and combine steam-powered Rube Goldberg-esque copper machinery with a healthy dose of creativity and you find yourself in Steampunk. It is grounded in just enough realism to create a genre, rather than a loose conglomeration of styles and ideas, yet open enough to allow for all kinds of experimentation and creativity.

Steampunk has been around since the mid-1980s and continues to find an audience; it hasn’t gone the way of side ponytails and acid-washed jeans (which are making a come-back, and I really can’t imagine why). What is it about Steampunk that makes it endure the decades, and has given it particular gravity recently? 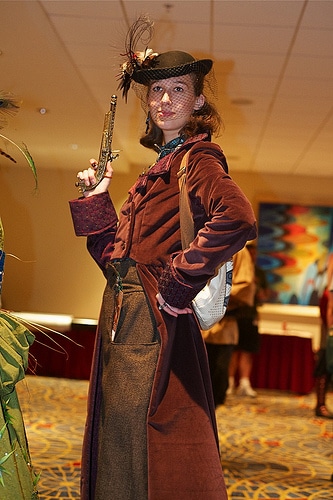 Lace and velvet, a fascinator and… an ornate embellished pistol. But of course! Photo by Brian Garrett.

One possibility is that the Steampunk style offers the option of the complicated, the lush, and an attention to minute detail. This is in stark contrast to the clean lines of IKEA and Helvetica; so much sparseness can edge toward sterility. Steampunk leaves modern sterility behind with a puff of steam and a grind of gears. While Victorian fashion is clean and, literally, buttoned up, Victorian machinery is loud, unreliable, and experimental.

Experimental and largely handmade! Steampunk allows people to try their hands at, well, anything. Those gears don’t have to work, you know, so go ahead and create. The genre supports the imperfect; after all, Victorians were great at the hand-crafted but not the mathematical perfection that our computers today can make. 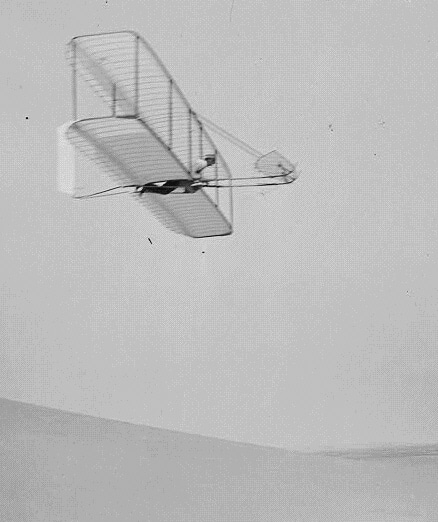 Steampunk and the surrounding community are forgiving and supportive of the process. Victorians sure didn’t get it right on the first time, either!

It’s not only beautiful, it’s functional. And if it isn’t functional (yet), it’s probably supposed to be. There is something in it for everyone. Artists love to make something beautiful and engineers want to make it work. If it’s not yet beautiful, I am quite sure it will be soon. If it doesn’t work yet, there is a gaggle of engineers poring over the issue as I type this and version 2.0 will be rolling out momentarily. 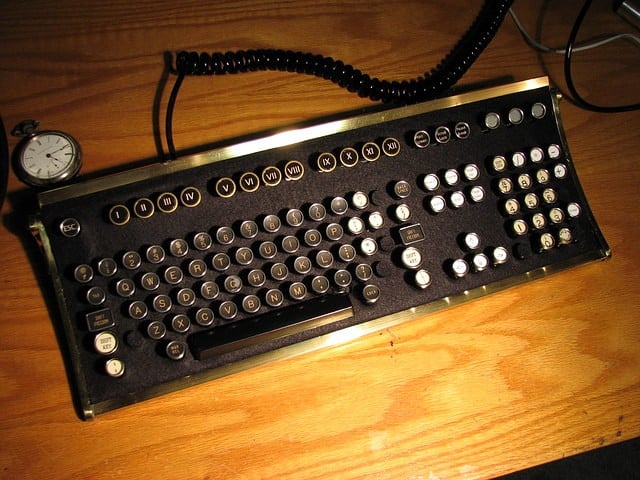 Which brings me to my next point: Generosity. It’s a generous genre, one that is wildly supportive of your flights of fancy. Who cares that your steam-powered pennyfarthing bicycle isn’t to scale, doesn’t quite work by steam, and is barely operable?
You tried, it looks fabulous, and it’s a great idea. The next iteration of the project may fare better; you won’t know until you try! You should try, too. Along the way, you’ll meet new and interesting people, find new solutions and some new ideas. 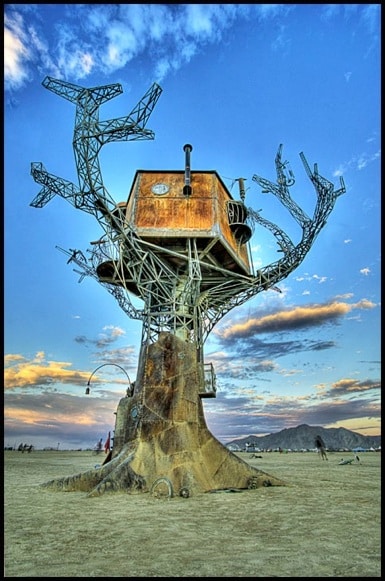 The Steampunk Tree House may not actually run on steam, but the beautiful structure and details within (yes! You can climb into it, up a ladder in the trunk) make it a thing of beauty. Check out the photos of the interior!

Steampunk is lush and layered, and texture reigns. As designers, use organic textures like wood paneling combined with copper rivets, interlaced gears or dense London fog, Here are some tutorials for texture combinations that are beautiful. 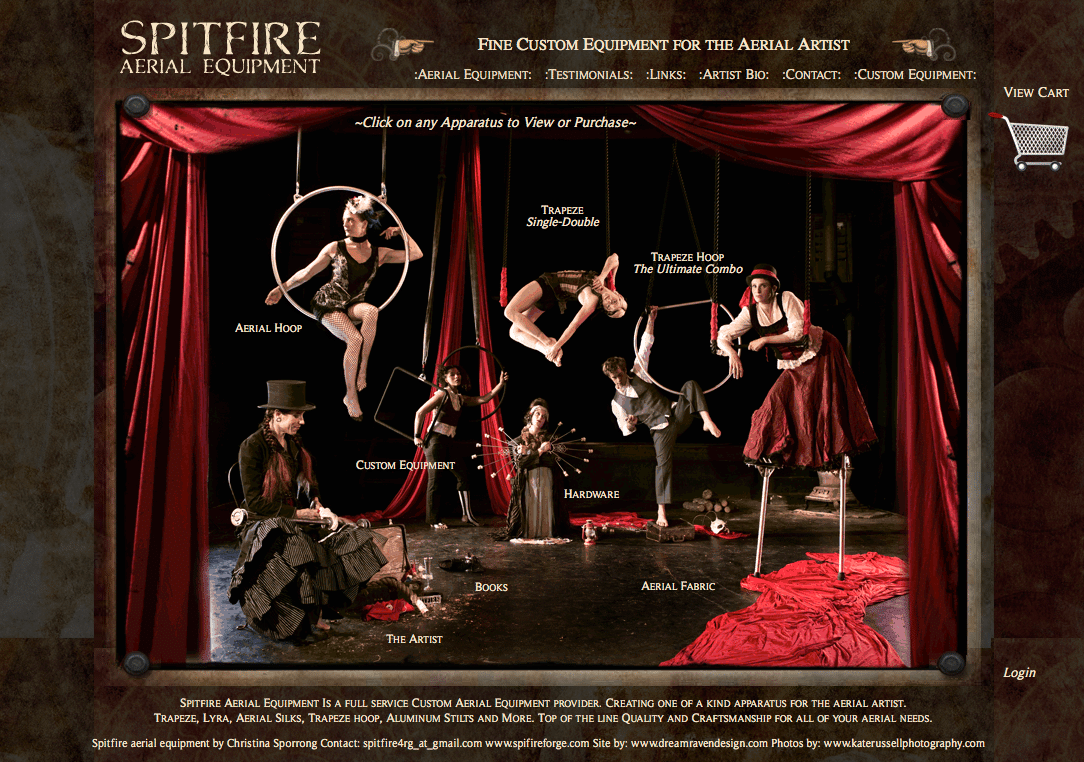 Spitfire Aerial Equipment is a circus equipment manufacturer with a steampunk influence in the Web site design.

Steampunk is an excellent genre in which to stretch your creativity in a new way and try something different. It is not, however, perfect. It can be a fascinating resource for inspiration to jump-start your creativity. Feeling inspired, or want to immerse yourself fully? The Steampunk World’s Fair is coming up in early 2016: May 13 – 15th.

Go find your goggles, pull up your boots, and find your imagination; I’m sure it’ll be a great ride.