Dynamism of a Dog on a Leash by Giacomo Balla, 1912

At the turn of the century, European life had begun to look drastically different than it did just a short time before. Cities were bustling with energy. The streets were dense with people and new forms of transportation had made new ways of living possible.

The steeped in history artistic traditions of the past were seemingly at odds with their newfound environment. As technological advancements continued to push every facet of modern life further into the future, this gap between the present and the world depicted in the art of antiquity grew ever-wider, the resulting dissonance of which drew the attention of young artists. 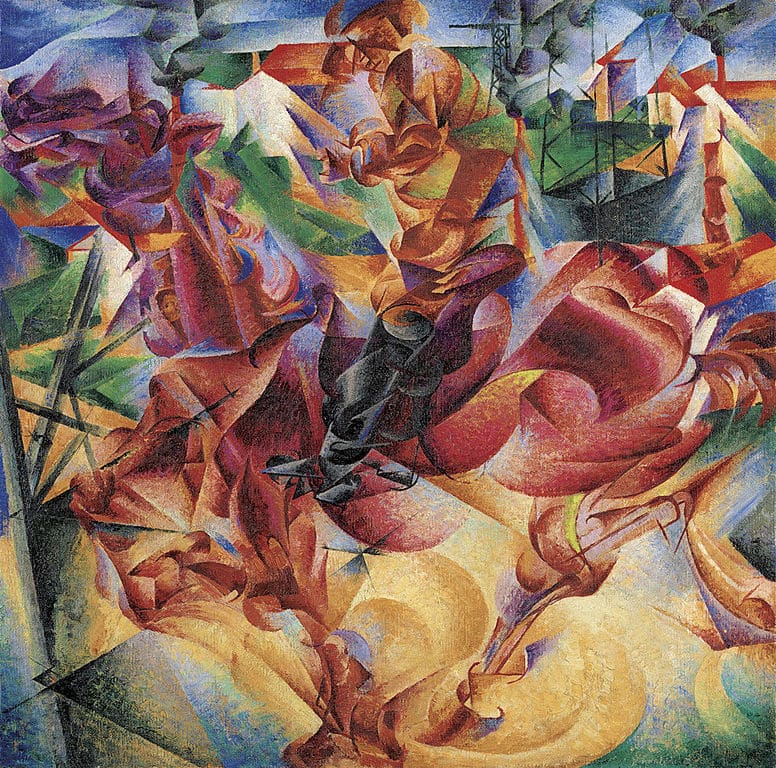 For those whom this new world was the only they had ever known, the models of tradition didn’t suit or reflect their way of life. In 1909, an Italian poet by the name of Filippo Tomasso Marinetti formalized this growing sentiment in writing by way of his Manifesto of Futurism. It was in this piece that the term Futurist was coined, thus providing those who shared his sentiments a banner under which to unite.

The Manifesto of Futurism, the first of many to be published under the umbrella of Futurism, was a bold declaration against the past and everything it represented. The Futurists sought not only to abandon tradition but to destroy it, in a manner reflective of the speed and violence of the future they aimed to create. The manifesto was polarising by design, sparking an immediate controversy and drawing strong reactions from the public, both for and against its ideals. 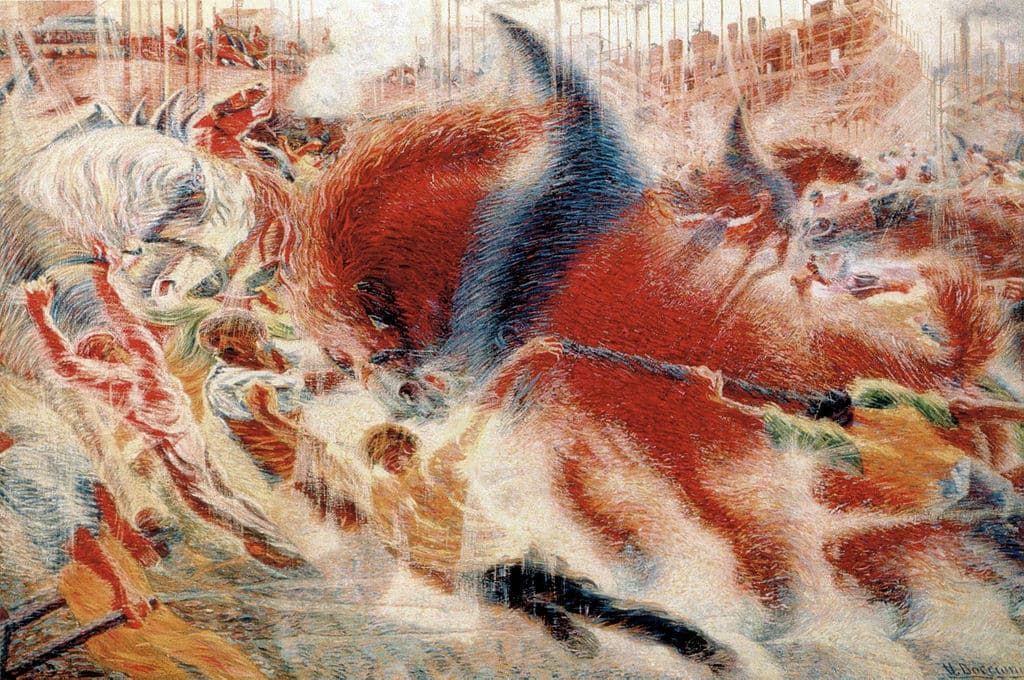 The City Rises by Umberto Boccioni, 1910

Before long, a group of Milan-based painters, inspired by the writings of Marinetti, joined the ranks of the movement’s early adopters as signatories of the manifesto. Among them were Umberto Boccioni and Gino Severini who would play pivotal roles in defining the visual aesthetic of the movement. Together with fellow painters Carlo Carrà, Giacomo Balla, and Luigi Russolo, Boccioni and Severini crafted two manifestos, the Manifesto of Futurist Painters, and the Technical Manifesto of Futurist Paintings.

The contents of these manifestos echoed upon those espoused by the poet while also adding declarations more specific to the medium of painting. The painters expressed their cynicism towards antiquity and their disgust with the fanatical worship of its mediocrity. Futurism was also strongly nationalistic, and the painter’s motivations reflected this. They sought to preserve the genius of Italian art and the nation’s position as a global leader by embracing science, spontaneity, and power to create a style reflective of their vision for the future. 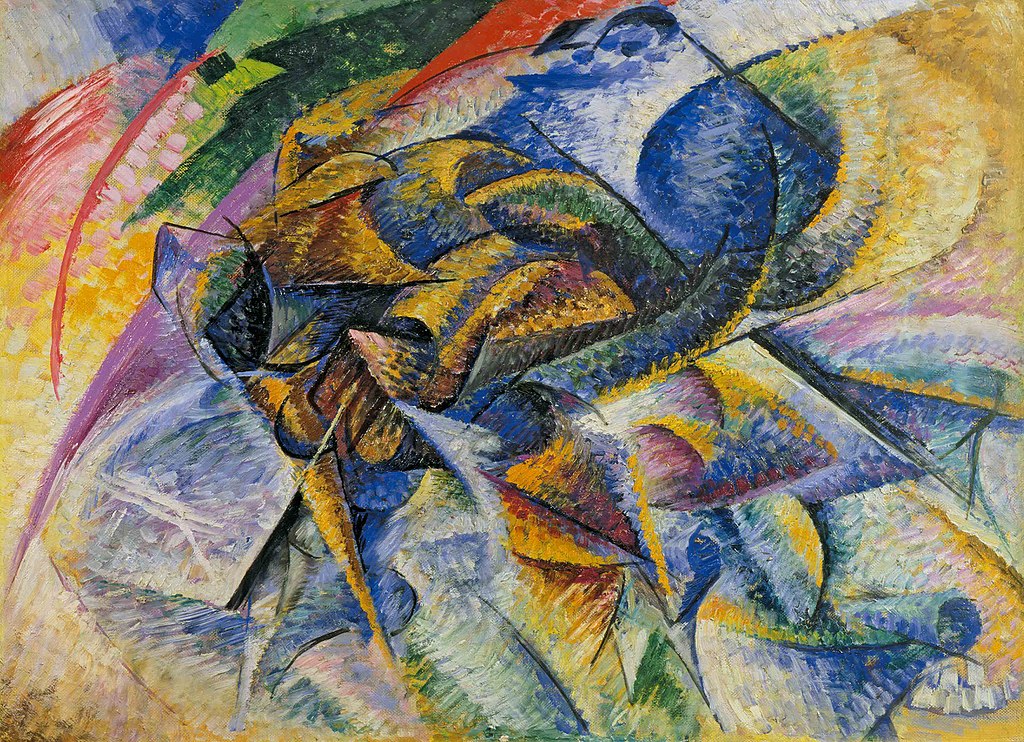 Dynamism of a Cyclist by Umberto Boccioni, 1913

Though the movement was outwardly anti-imitation, the painters embraced both Cubism and Divisionism for their qualities that embodied the group’s vision for the future of painting. Divisionism, in which forms are broken into dots or strokes of individual colors, served to communicate a sense of movement and the vibration of colors interacting with the eye. Similarly, Cubism offered a means of depicting subjects in a dynamic manner, lending even static subjects a degree of motion.

The futurist painters no longer sought to depict a single moment in time, but the sensation of dynamism itself. No longer satisfied by simple realism through form and color, multiplications, vibrations, and the appearance and disappearance of forms became a means of more accurately depicting the truth of their subject matter. Interactions, between the painter and the painting, the subject and its environment, and the viewer’s eye and the canvas were a point of focus for the Futurists. 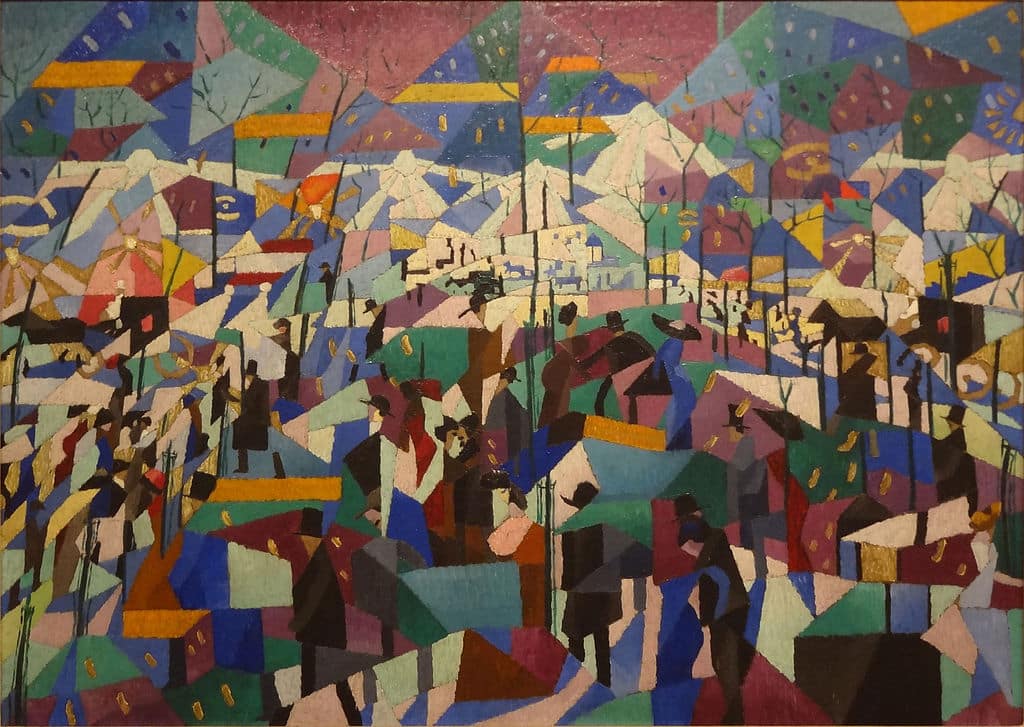 They viewed their subjects not just as the object they were painting, but the sum total of the whole of everything around them. Seeking to recreate this experience between the viewer and the painting, subjects were often depicted from multiple angles simultaneously, with repetition employed to develop the sorts of rhythm present in living motion. This often resulted in paintings that feel like multiple frames of a film or animation all blurred into one. The subject matter depicted in Futurist paintings were also often inherently symbolic of motion themselves, with vehicles like cars and bikes as well as dancers and bustling cities making a frequent appearance.

Futurism also had a Russian proponent. Inspired by the writings of Marinetti, a group of writers and painters joined forces to form a movement that followed suit of their Italian counterparts, even sharing similar Cubism inspirations. 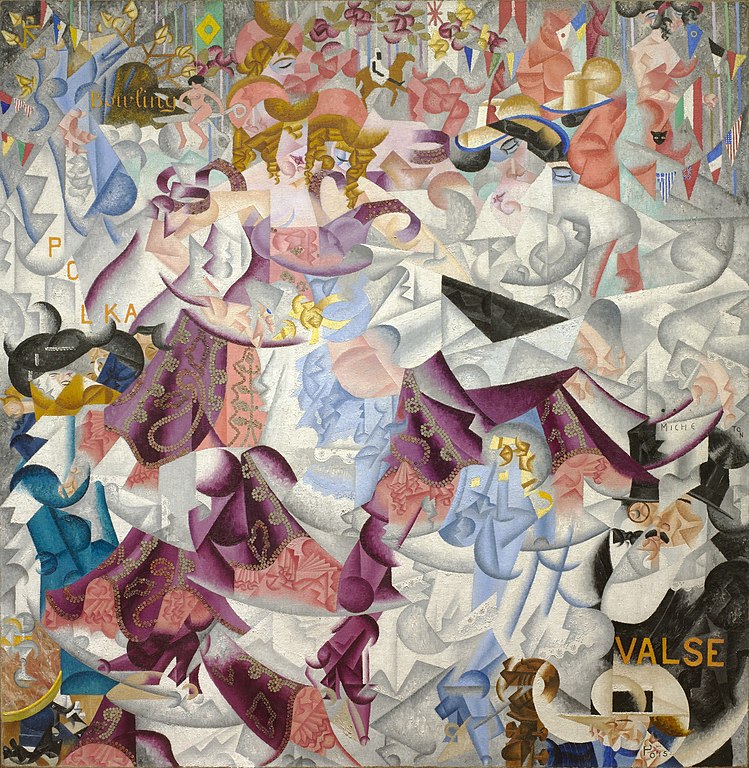 Dynamic Hieroglyphic of the Bal Tabarin by Gino Severini, 1912

Futurism left the world with the same violence and speed with which it entered. By 1915, the movement was on its last legs, and what was left of Italian Futurism largely died along with Boccioni in 1916, who through his painting and sculptures had come to be one of the movement’s most prominent figures. 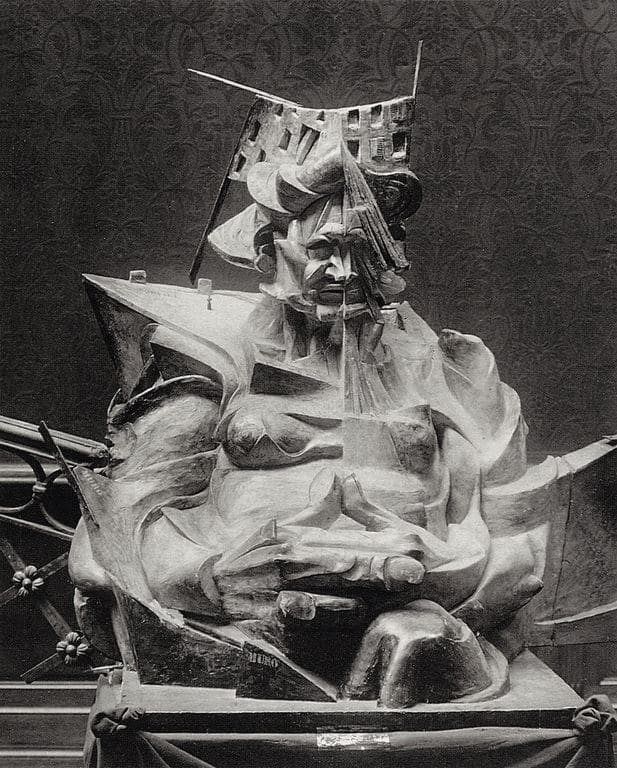 Although today, the term Futurism is most closely associated with the paintings produced by the movement, Futurism’s influences weren’t limited to just painting and poetry. Advocates of the movement’s ideals also experimented in sculpture and architecture and several movements that followed were influenced by the works of the Futurists, including Art Deco and Constructivism. While the movement itself was short-lived, their passionate cry for originality and embrace of modernity echoed far into the future, the reverberations of which can still be felt today. 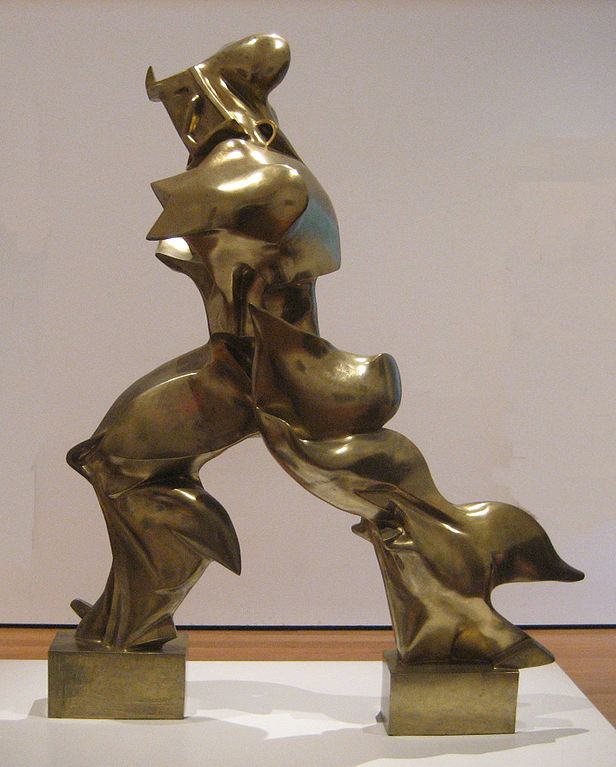 Unique Forms of Continuity in Space by Umberto Boccioni, 1913 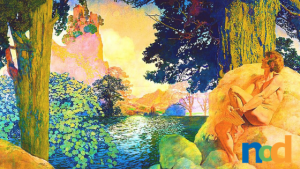 Why They Work: Maxfield Parrish 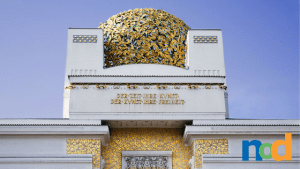