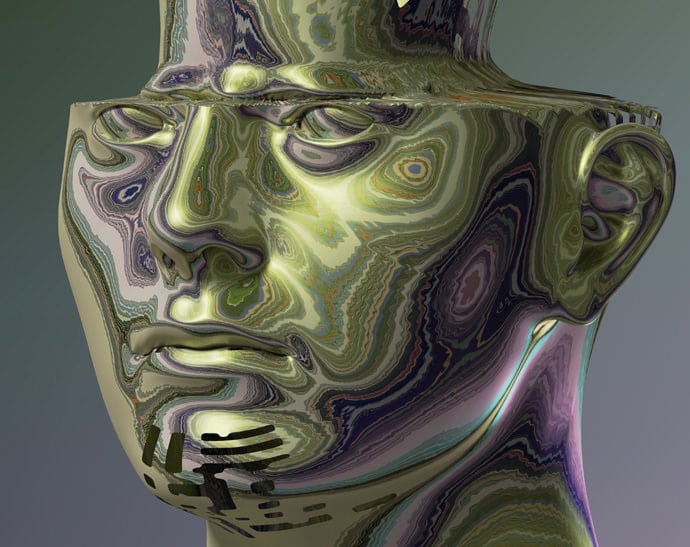 Digital artist Mark Klink makes arresting images by exploiting the features of our design and 3D software programs in unexpected ways. His images of faces and figures are sometime called “Glitch Art” because he deliberately modifies objects and their rendering to create effects that look like accidents. In this interview he talks about his background, his process, and some of the artists who inspire him.

Mark, can you tell us about yourself?

I’m a 65-year-old white male, married with a wonderful wife and terrific daughter, who have both been very successful in their professions. I’ve been making Art and “Art-like” things for the entirety of my life. I’ve made my living many ways, from sweeping floors, to programming computers, to teaching children.

How would you describe your artwork?

I work primarily in the area of 3d.. modelling, texturing, rendering. Sometimes the products are stills, sometimes video, and sometimes interactive, game-like simulations.

Where did you start as a digital artist? Did you explore other forms of art first?

I date way back.. back before the Internet, back before the personal computers (in fact, back before color TV and before the wide-spread use of transistors!!) I started as a painter. Later, I became a traditional printmaker, focused on copperplate engraving.. only much later did I start to work with computers.. early Macintoshes with 640×480 pixel screens and MacPaint.

I became an expert in scripting Hypercard and taught myself C programming so I could write Hypercard code extensions called XCMDs and XFCNs. Some of those proved quite useful to people creating multimedia projects during that era. Since this was before the public Internet, games and such had to be distributed via CD-ROM disk. Code I wrote became part of over a hundred CDROM and other software projects. During this time I created a fairly popular shareware game called “The Haunted House.” Aside from the programming, I created all the graphics and sounds.. Since then I’ve tried to keep up with the latest advancements in tech and media. You might say that I’m one of the few people who’ve made the leap from cutting-edge 15th-century tech (intaglio) to 21st-century tech 😉 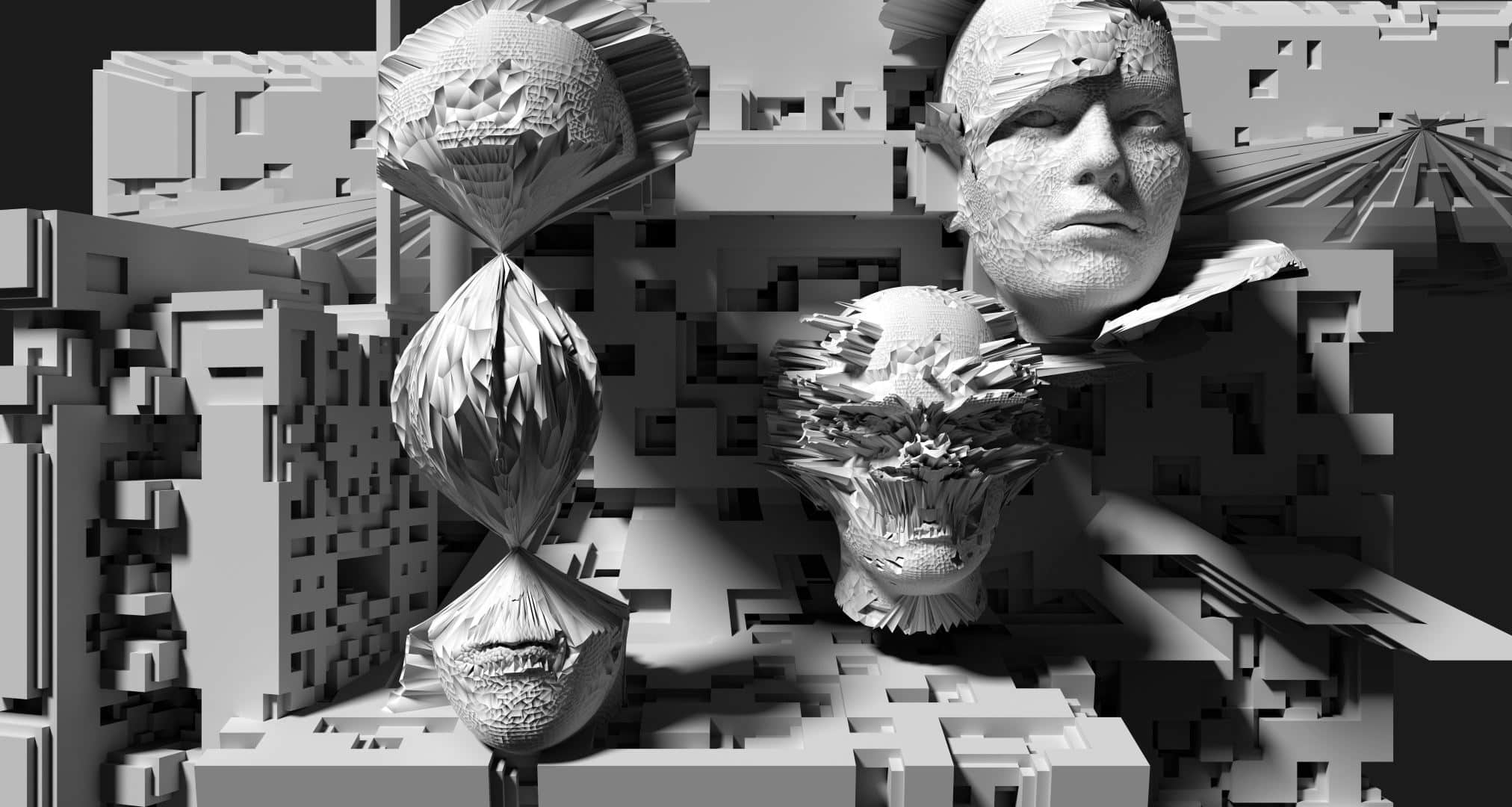 What artists of the past or present have inspired you?

Oh.. so, so many.. One of the beauties of art is that while there is a continual change there is no “progress” in the sense that we can presume that what we do now is fundamentally “better” than what artists have created in the past. I’ve been affected by, and learned from, all of the artists, past and present, whose work I have encountered.. from the paleolithic artists who drew on the walls of Lascaux, to the Egyptians, to the Greeks, Chinese, and Japanese ink painting, Persian miniatures, the high Renaissance.. on and on to the present day.. rather than try and list all of those, I’ll mention only a few contemporary artists whose work I particularly admire .. and this list is necessarily much too short.. but I have to set limits!

These days I am especially interested in artists who use technology to create works that reveal some larger imaginative structure. I’ve found that it is not all that difficult to create new visual effects.. current technology is so rich and powerful, there are so many possible permutations and combinations of the parameters.. all one has to do is “play around” with the tools and new things – effects no one has ever seen before – will inevitably emerge.. so we’re drowning in visual novelties. What is much more difficult is to construct/reveal some larger, a more complex imaginative whole.

Here are some artists who do just that:

Lorna Mills is a favorite of mine. In addition to her own innovative and highly influential work with animated GIFs, she is the organizer behind the video “Ways of Something“, which I consider to be a seminal new media artwork.. it brilliantly incorporates so many of the key features of contemporary Art.. It is built around creative appropriation.. the re-purposing of the soundtrack of John Berger’s documentary series “Ways of Seeing” as well as countless visual quotes and allusions throughout the video. It was created by many artists working collaboratively.. a different artist did the visuals for each minute of the film.. and the artists come from all over the world! This way of working would be unthinkable before the Internet.

Claudia Hart has been a pioneer in the use of 3d modelling and rendering tools for experimental art. Her work engages the history of art, issues facing women, particularly in the context of tech.. She’s also been extraordinarily influential as an educator.. her program at the School of the Art Institute of Chicago was the first to focus on 3d as an experimental art form rather than as vocational training.

Carla Gannis also uses current media to engage the history of art and issues affecting women. She explores the notion of the self and the presentation of the self in the context of social media, networked culture, etc. .. often with a humorous twist. She is also influential as an educator, teaching at the Pratt Institute.

Morehshin Allahyari grew up in Iran and emigrated to the U.S. Moreshin uses video and 3d printing to reflect on issues of censorship, exploitation, and the paradoxes and complications that emerge from her own unique experience.

One thing you’ll note.. and it would be true of the many artists working in this area that I would have mentioned if I had the space… four of these are women.

In contrast to most of the “traditional” art world of brick and mortar galleries and museums, and in contrast to the traditional tech game and video industry, women are far more prominent [in the digital arts.] The situation in the tech industry in general and gaming in particular hardly bears mention (think “Gamergate”). When it comes to the traditional “Art World” I suspect that the under-representation of women has to do with the inherent conservatism and the received fantasies of many gallerists, art administrators, and collectors…

There’s an irony in that much of the Art World thinks of itself as progressive and experimental.. as producing and appreciating “Modern Art”, when, in fact, it is recycling ideas and techniques that are now over a hundred years old.. we’re in much the same situation as the late 19th century when a number of movements were beginning to undermine the various forms of moribund academic Art. However, when it comes to contemporary experimental, digital art, the various “gatekeepers” simply don’t have the influence they have elsewhere. 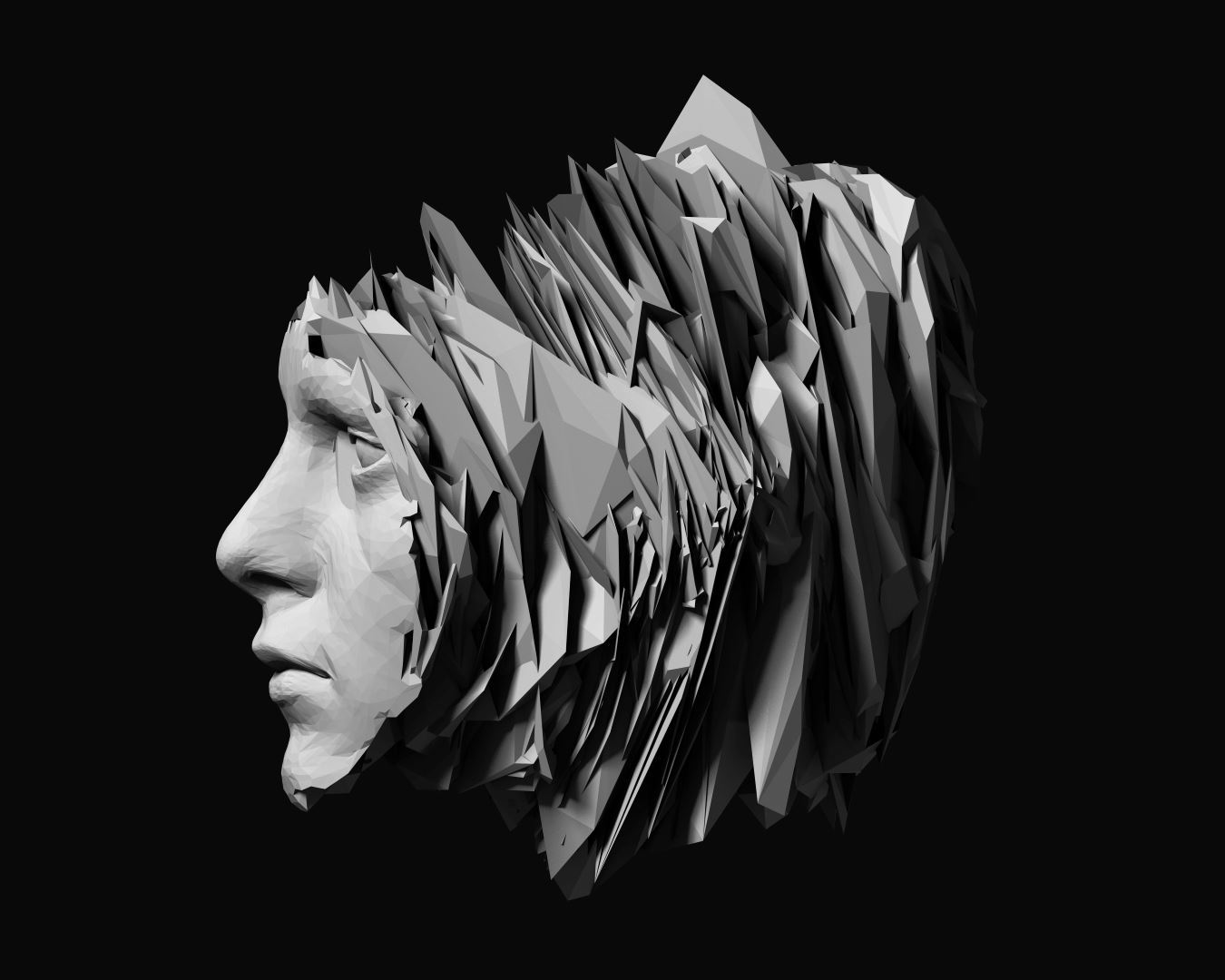 How did you develop your distinct aesthetic style and craft? Was it an experimental process, iterative?

I think it is experimental and iterative.. It has been a very gradual process. I think some artists are gifted from the beginning with a unique vision or perspective.. but for me, this has been gradual accretion. I feel like some old sea creature who has been swimming around a long time.. various barnacles, seaweeds, remoras, flotsam, and jetsam have attached themselves to me, creating my particular mini-environment .. but it hasn’t been just a passive process.. I’ve been actively exploring, insatiably curious, the entirety of life.. it’s been a cumulative process!

What motivates you as an artist? Is it curiosity, the search for beauty or meaning?

I think curiosity more than any of those things you mention.. I hardly know how to define “beauty”.. I suppose “interesting” is more compelling to me. As for “meaning” .. that is even more elusive… I simply “make”.. that brings me joy.

What subject matters interest you? What are some of the stories behind your work?

I don’t really approach my artworks by thinking of a subject matter that I wish to explore.. I think I discover that subject matter in the process of creating the artwork.. It’s only after the fact that I can say anything regarding what the work is “about”, and even then, it is conjecture on my part.. I’m guessing as much as anyone else!

That said.. I think there is an anxiety reflected in my work.. we are living in the “Anthropocene”.. an era when blind human impulse combined with our fantastic technological advances is placing both we humans and the entire environment under a range of threats. We seem to be on the edge of some sort of post- or extra-human world where artificial intelligence, biological experimentation, and other technological advances put all of our traditional values and sources of meaning under question. 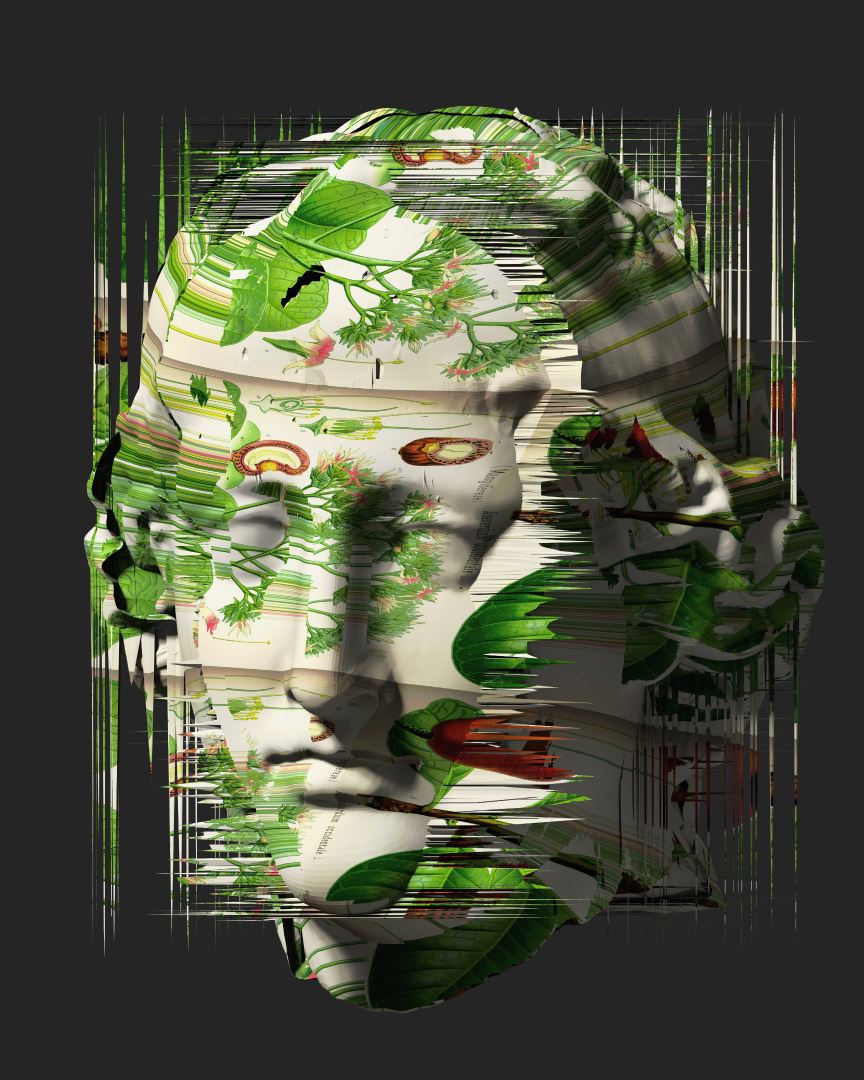 What are some of the tools you use to create your distinct style of artwork?

As much as possible, I use open source tools: Blender 3d, Meshlab, The Gimp. This is only partially an ideological choice. If I were working as a commercial artist or designer I would, of course, work with industry standard software such as Maya and Photoshop. Sometimes I miss the functionality of commercial software. However, I’ve also had the experience of working with commercial software and then having the owners decide to abandon or neglect it when they calculated that was, for them, the economically advantageous choice.. there’s less chance of that happening with open source. 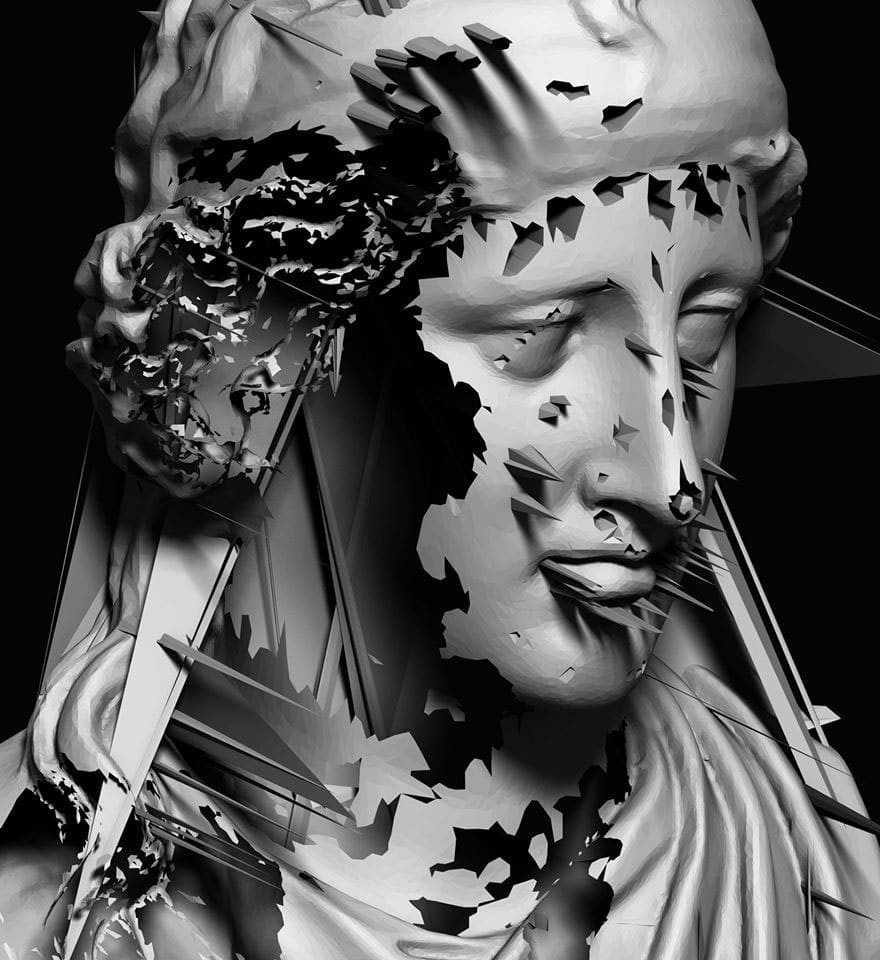 What do you predict for the future of this kind of art? Where would you like to see it go?

In some ways, it will become easier, more accessible. You already see that with ready-made apps that allow anyone to make “glitch art” or to easily make 3d models.. of course the danger is that people with become entranced by that sort of “easy-to-use” software and will become blind to the fact that there are so many more possibilities than what particular programmers envisioned… that there are ways to break out and create something really new. 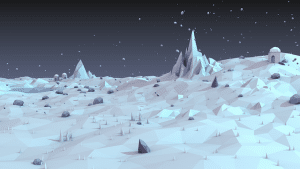 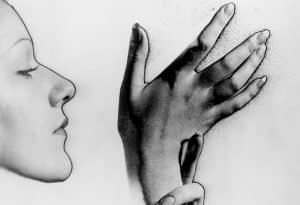 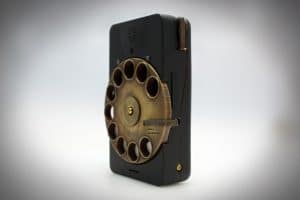