Notes from a Studio Tour 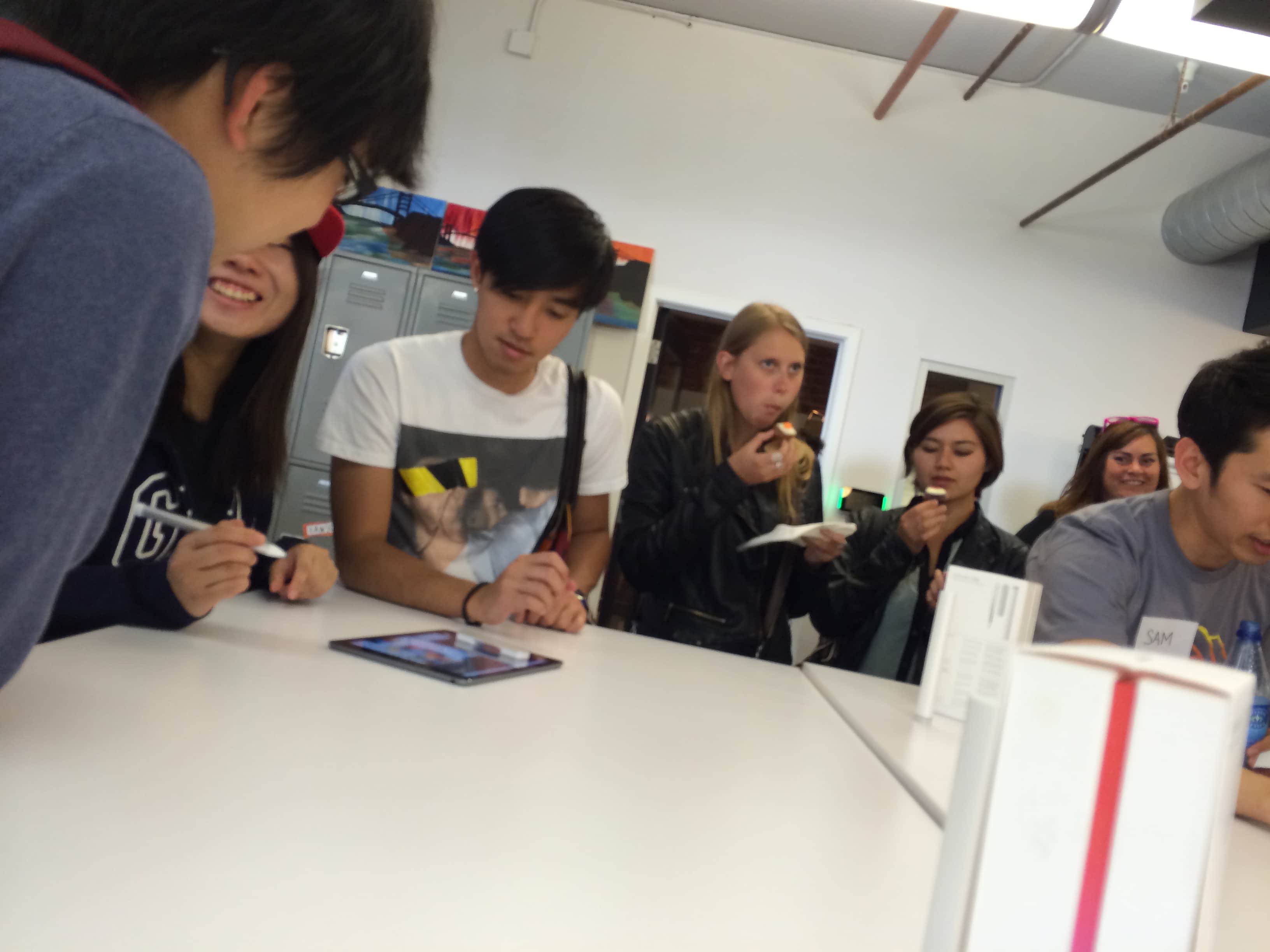 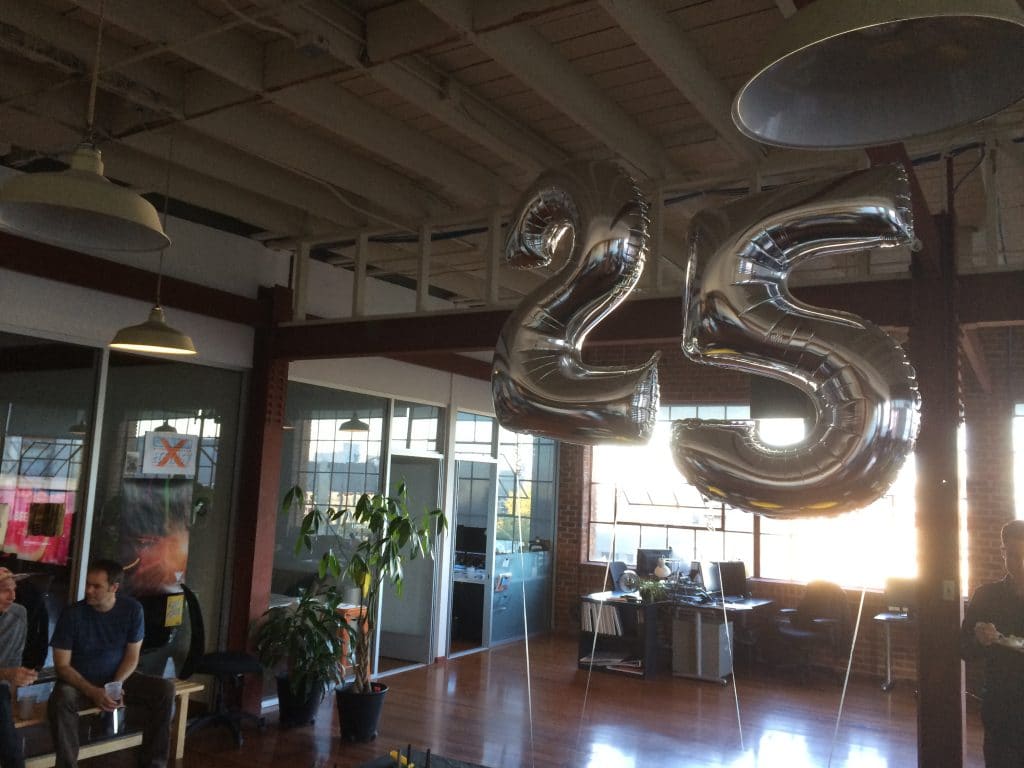 What’s it like to work at that company? This question was answered in San Francisco Design Week by two nights of Studio Tours, one of the most fun events in a fun-filled program. Studio Tours allows hundreds of Design Week attendees (or anyone else, frankly) to invade the cool, lofty, Mac-filled offices of creative companies in SF to see how they work.

So many companies open their doors to Studio Tours every year that around 600 people visit over 40 companies, with the tours spanning two geographical areas over two nights – “Embarcadero – Financial District” and “South of Market – China Basin.” It was a perfect networking opportunity for students, graduates, job-seekers, employed designers with itchy feet, collaborators, headhunters, you name it.

I joined the Wednesday tour, which covered this color-coded route on the Mosey app: 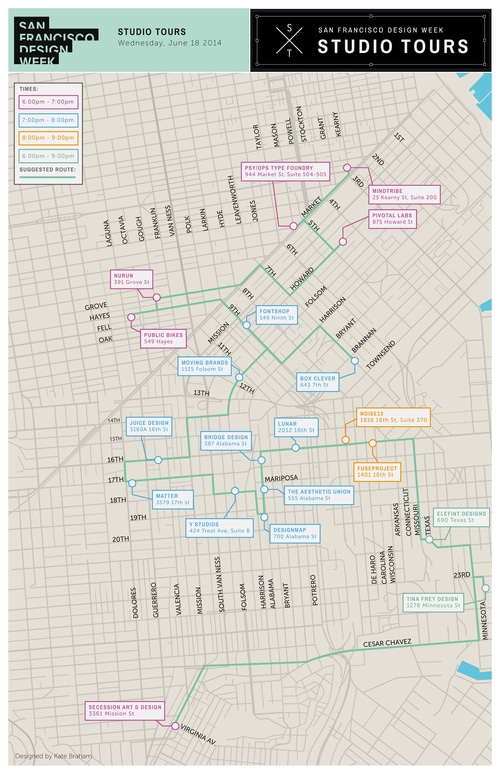 Looks ambitious, right? Truth be told, I set out with great ambition to hit all 20 companies and ended up bagging a paltry five. I still won, because I had some awesome conversations and hung out with cool people at every stop. My thanks to Mindtribe, PSY/OPS, FontShop, GE Software Center, and Matter for their hospitality! (Especially to the staff of GE Software Center of San Ramon, who took it upon themselves to ferry around designers on a crazy old bus with an Elvis boudoir, serving cocktails and karaoke. GE, the designated driver with a difference!)

Here are some notes on two cool companies to work for:

First stop on the tour at was the design consultancy Mindtribe, a team of 30 or so engineers who create beautifully designed products. Their portfolio, visible in the doorway at their 25 Kearny St office, includes such mindblowing but powerfully simple products as the Square Stand, the Tesla roadster, and the Flip Mino. On show during the Wednesday night tour and released THAT DAY was the new Adobe Ink and Slide stylus product.

The Mindtribe team designed the Ink and Slide, an attempt to reinvent the familiar graphic stylus, over a two-year period, working intensely with Adobe on the product brief. The result was nicely packaged, waiting for users to try it out at the Mindtribe studio: 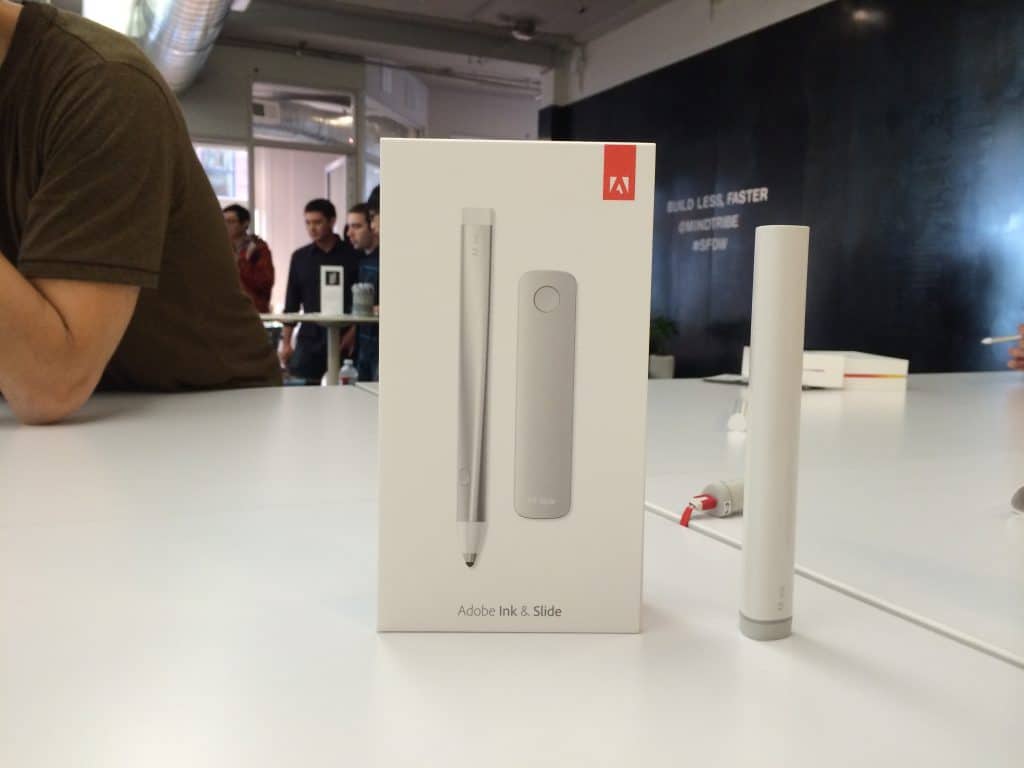 Adobe Ink and Slide at Mindtribe. 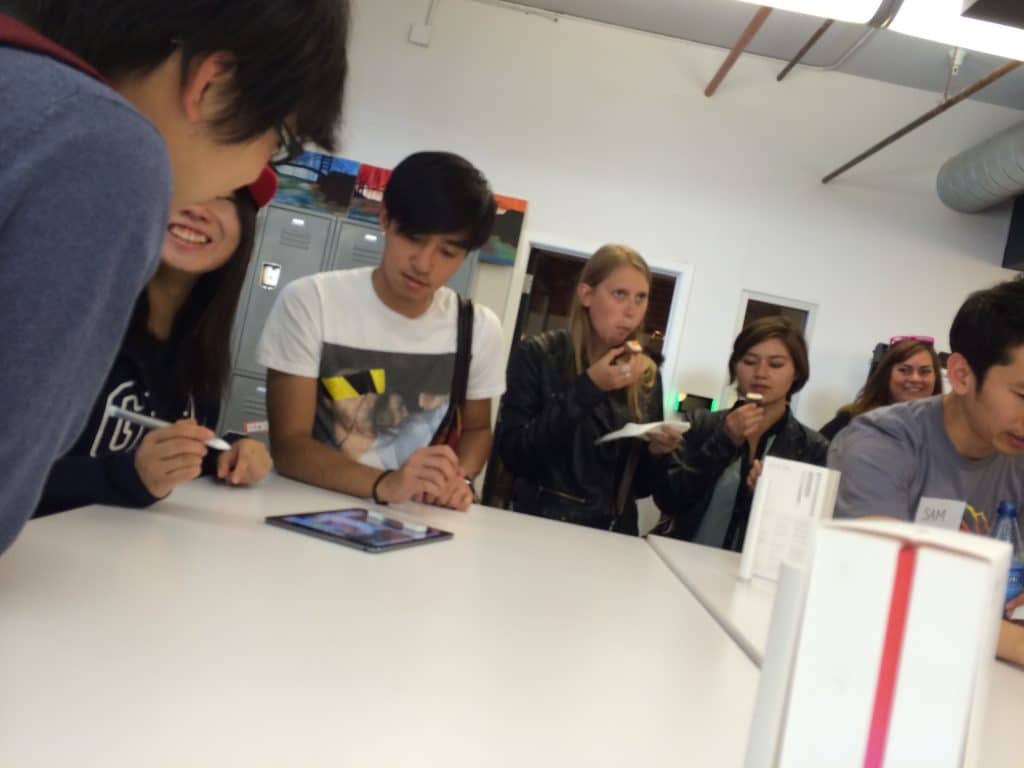 A couple of engineers at Mindtribe were nice enough to talk about the design and development process for Ink and Slide.

While Mindtribe is an engineering firm exclusively (they have no designers on staff) the entire process of developing the stylus seemed commendably design-driven. Working with the Adobe product development team, Mindtribe analyzed existing stylus products, taking them apart and looking at usability strengths and weaknesses. They worked to a comprehensive design brief that evolved quite a bit as the project moved forward.

Below you can see some milestones in the development of the Ink. As you can see, it evolved from a tethered design into a free-floating design that takes advantage of the Creative Cloud. The vision is that designers carry it from meeting to meeting, airily accessing artwork to impress their clients! 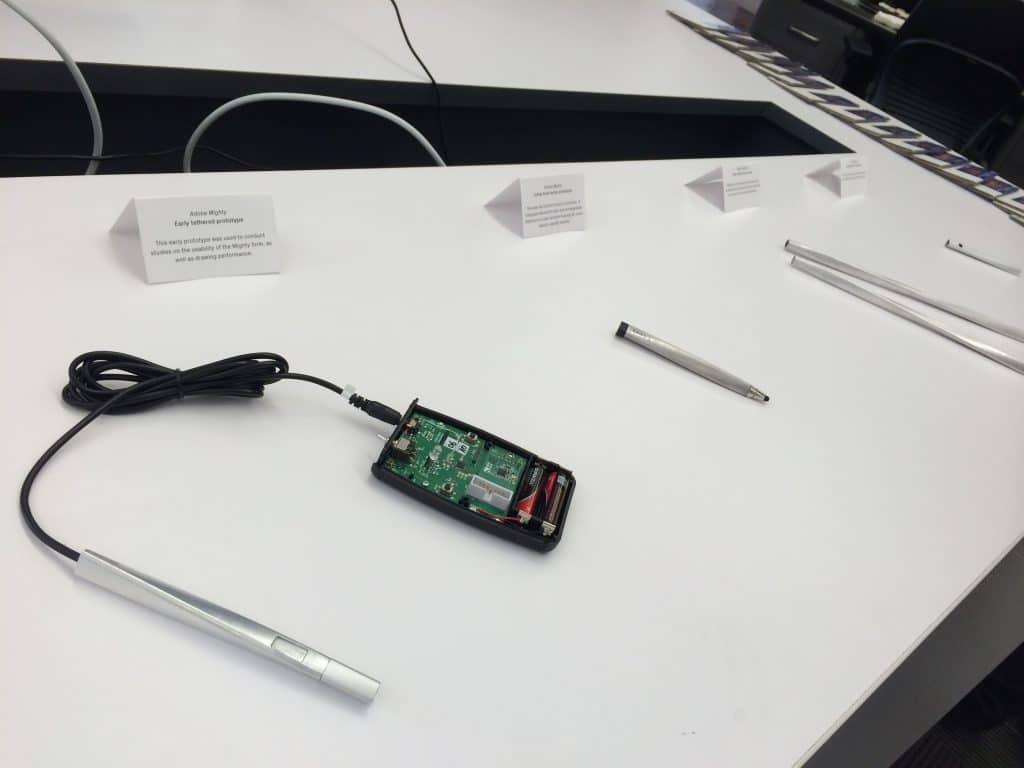 I got to try out the Ink and Slide for a minute, and while I’m not a stylus user (or illustrator, or even an artist), it certainly seems a breakthrough compared to many other products.

A lot of attention had been paid to making the Ink touch and pressure sensitive, to have it feel more like an actual pen. The light weight, metallic surface, and twisted bevel of the pen made it effortless and fun to grip. The charger for the device is integrated into a nifty cylindrical carry-case that actually flashes rainbow colors until charged. (No really, this is cool).

Thanks to its design values, the Ink has crossed that hard-to-define line between being a device and being an object that one might want to own, carry around, even flaunt. Now if we could only make drawing as cool as listening to music through headphones…

One more thing: I almost forgot about the Slide, the partner product that acts like a slide ruler to help you create lines and regular shapes, assuming you have two hands free. It seemed cool if you like straight lines, and a further example of useful innovation. Hats off to the teams at Mindtribe and Adobe!

My next stop on the SF Studio Tour was PSY/OPS, a type foundry dedicated to “typeface design and alphabetic innovation.” PSY/OPS is a small but hugely talented typographic team led by Founder and Principal Rod Cavazos. Under Rod’s leadership, the studio has designed literally hundreds of typefaces over two decades. If you’ve ever dabbled with designing a typeface, you’ll understand the Sisyphean scope of their work. 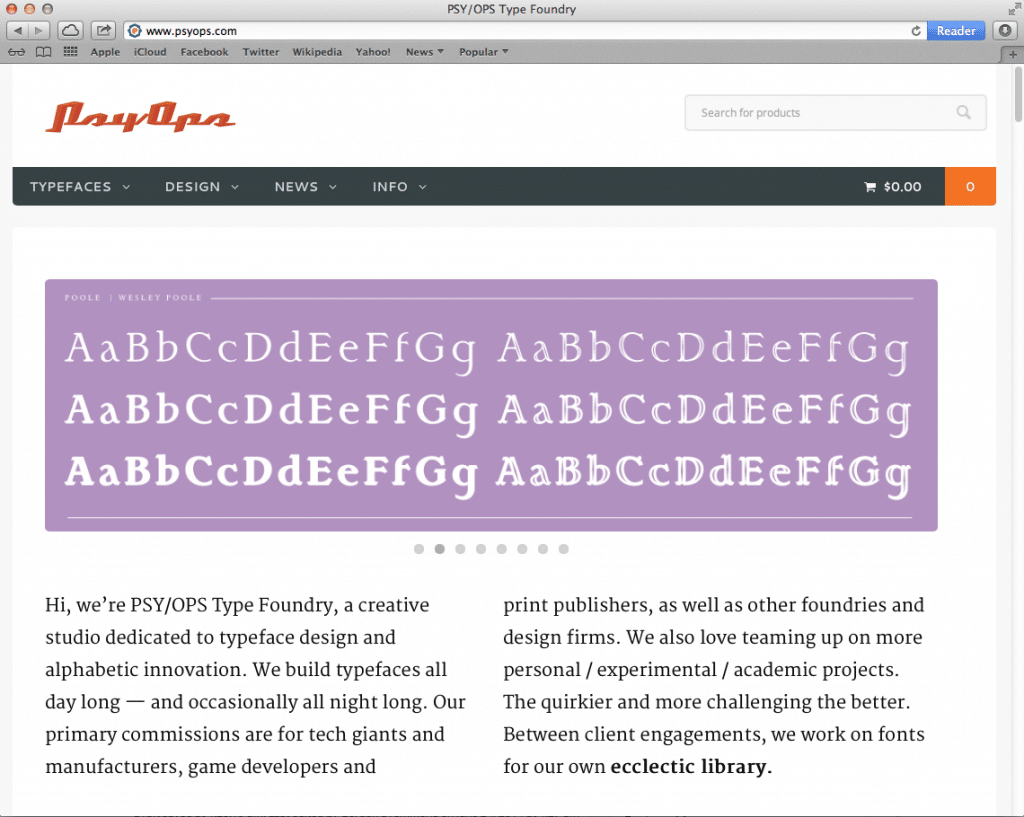 The fascinating thing about PSY/OPS, as you might guess from the name, is that their work is largely cloaked in secrecy. Most of their work (about 80%, according to two team members I met) is dedicated to creating unique, commissioned typefaces for “tech giants and manufacturers, game developers and print publishers, as well as other foundries and design firms.” Brands associated with PSY/OPS have included EA Sports, KFC, and Madonna. Companies will handsomely pay PSY/OPS for the right to have a font built that fits a specific project — say a video game or new product — that they can use exclusively and without any fear of imitation.

At a certain point in the tour, it dawned on me that I’ve probably seen a lot PSY/OPS’ most distinctive work, but for client confidentiality reasons, I’d never know! It’s like some dawn raid by airborne drone or a James Bond mission. Poof, and the font is there, doing its subtle work, subverting your psyche.

During the studio tour, I got to chat to staffers James, Justine, and Chiharu, as well as Rod’s lovely wife, and to hear Rod talk a bit about how we helps clients define their brief when they come to PSY/OPS with a project. The staff all seemed excited about working with type and working with PSY/OPS. In between operations, they design classy, original typefaces that are commercially available through Fontshop, Typekit, T-26 and more. An offshoot company called Glyfyx creates toys, products, and games to promote the alphabet and thus solving most of my ’14 Christmas shopping in one fell swoop. 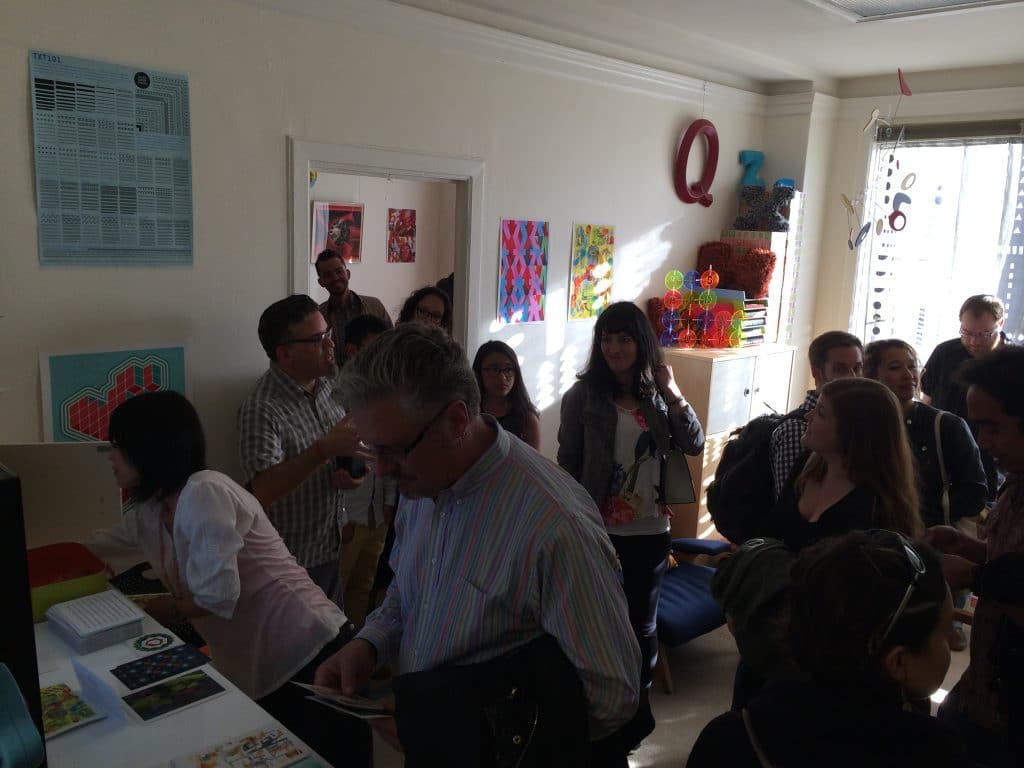 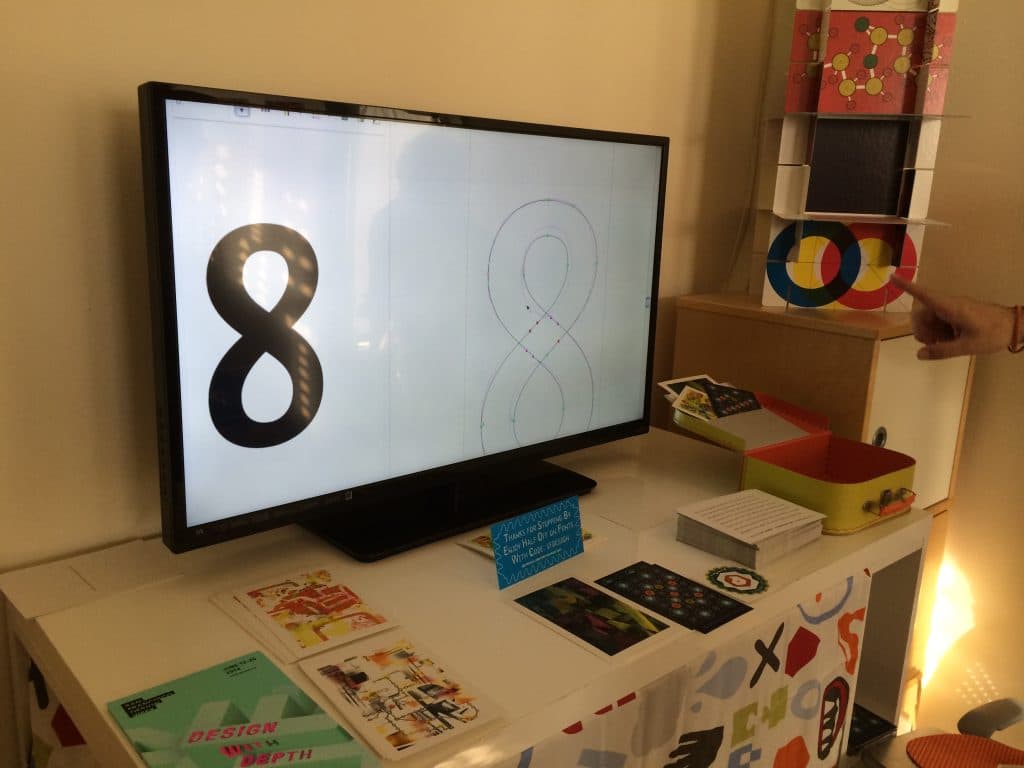 In the tour, you could see animations of type being designed–but for which client? Can’t say!

Peeking at their work and touring their office I thought it was an amazing niche for a design company. It says a lot about the strength of their work and about the enduring power of the typeface that brands continue to understand that an original typeface could be a central, important, defining feature of a product or campaign. Maybe that’s why FontShop, my next destination, was celebrating its 25th birthday! Happy birthday, font company! Type lives on.

An accredited school of the visual arts, Sessions College has programs in Graphic Design, Illustration, Advertising Design, and more. Check out our 100% online programs and ask for a virtual tour.