What essentials do artists and designers just need to know? In this online art history course, you'll build a foundation in art and the artists who created it. You'll explore profound themes that have concerned artists for centuries: nature, the human body, society, religion, and politics. Through engaging lectures and projects, you'll learn how to identify the mediums, materials, and techniques artists use and discuss the styles of important artists, art movements, and historical periods from antiquity through the mid-20th century. 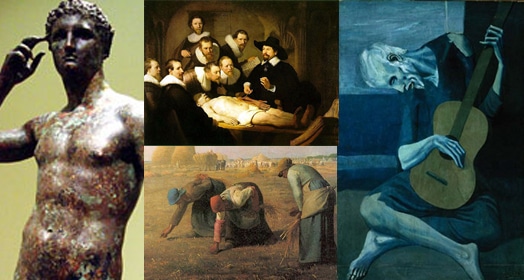 Learn about art in its social and historical context

Stretch your skills, grow your portfolio

Learn at Your Own Pace

Lesson One begins by exploring the nature of art, the aesthetic experience, and the artistic process. You'll learn how to identify the visual elements in an artist's composition and study some of the important mediums, materials, and techniques used in creating art throughout the ages: drawing, painting, sculpture, and printmaking. To develop tools for thinking about art, you'll examine about some of the critical methodologies academics and writers have used to analyze art.

Since the dawn of history, art has been influenced by natural world. Lesson Two explores how artists have looked at nature, beginning with cave art and early Egyptian, Islamic, and Chinese art, and extending through the Renaissance and Baroque periods to the 19th and 20th century. You'll learn how and why the representation of nature changed at critical junctures and explore the relationship between nature and abstractionism.

The human figure has always been a favorite subject for artists. Since ancient times, painters and sculptors have portrayed the most important people in their societies. In Lesson Three, you will study not just the treatment of the human body throughout the history, but also the motivations and psychological factors involved in portraying a human subject. You'll study the idealized figures of Classical Greece and Rome, and examine how this approach evolved in the Renaissance and Baroque periods and in 19th and 20th century sculpture. You'll also learn why the body of the artist plays such an important role in the contemporary art world.

Project - Men and women through the ages

4 - Art and the Social Realm

Art is a window on society. For centuries, art has been used for all sorts of social commentary: to express political beliefs, attack social ills, criticize war and poverty, send up kings and queens, and more. Lesson Four explores how representations of society have changed throughout the ages. Topics examined include the social and historical factors in Baroque art, Romanticism, Realism, Impressionism, Expressionism, Social Realism, and Pop Art.

From Renaissance Rome to Africa, China, Japan, Central and South America (and beyond), artists have created art for religious and ritual purposes—or in modern times, grappled with spiritual and mystical themes. In Lesson Five, you'll explore the important role religion has played in art, studying ancient ritual objects, religious architecture, Byzantine mosaics, and even modern transcendental painting. The lesson will help you connect the traditional role of art in religion its modern-may manifestations, including myth, symbolism, and mysticism.

6 - Art and the Politics of Power

Art with a social conscience can be political—a voice of protest, an attempt to spark awareness of an issue—or it can be documentary, a study of social relationships or a spotlight on a certain group of people. In Lesson Six, you will explore art's role in supporting or protesting against a specific ideology or political position. The lesson begins by examining art in Gothic cathedrals, which were once seats of political (as well as religious) power, and discussing the role of politics and patronage in Renaissance art. Then you'll learn how Dada and Surrealism emerged as art movements that challenged the values and power structure in art and study how Communists used art as propaganda. You'll wrap up with a look at Mexican revolutionary murals and modern Feminist art.

Students in this course can expect to learn to:

Interested in this course? Scheduled and self-paced enrollment options are available. Ask Admissions about taking this course as part of a degree or certificate program.

To take this course you'll need:

Kevin Hedgpeth is an artist, illustrator, animator, and educator. 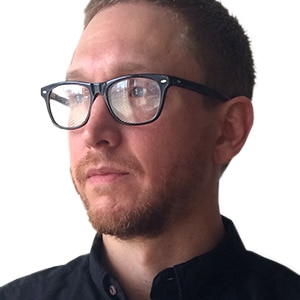 Jordon Schranz is an audio/visual artist and designer.

Enrolling online is easy and convenient.

Chat with our knowledgeable admissions staff to select course and program options.

Did you know? You can take this course as part of an award-winning certificate or degree program.