When a Design Wrong Makes a Right 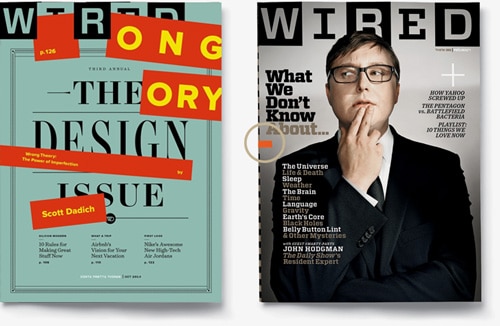 If you’re a design rebel or an iconoclast, you’ll have found a lot to like in Scott Dadich’s article Why Getting It Wrong Is the Future of Design in the October design edition of Wired.

In the article, sandwiched among many glossy pieces about transformative examples of design and technology, Dadich presents a compelling case for designers to reject conformist design styles in favor of work that cheerfully includes the ugly, the jarring, and the flat-out wrong. Taking a cue from art and music, Dadich cites works by Degas, Stravinsky, and Miles Davis as examples of art that engages us, enrages us, and ultimately transforms us by knowingly challenging our concepts of what is correct.

What I found intriguing was the idea that solutions currently accepted as standards in consumer-oriented design, like the increasingly converging interface designs of the iPhone and its competitors, might be due for a reboot. As Dadich points out, “Google, Apple, and Microsoft all use clean, sans-serif typefaces in their respective software. After years of experimentation, we have figured out what people like and settled on some rules.”

What’s happening here is that design is lulling us to sleep with a smile on our faces. Dadich’s analogy to classical artforms suggests an uncomfortable truth: We are living in an age where we please users and audiences with delightful and sophisticated designs which for all their merits have become predictable. To some extent, most designers are supporting a paradigm that is due for a shift. Or, if we’re not going to man the barricades for the revolution, he’s arguing, at least do something to challenge the orthodoxy and stand out! If only a tad.

Dadich’s piece is anchored by a funny professional anecdote that supports the need for more “wrongness” in design. Dadich tells the tale of creating a beautiful, refined, monochromatic cover design for an early edition of Wired. The art director wanted more color or “pop,” and so Dadich got mad and added a pointless, egregiously wrong design element, a little neon orange rectangle. That little neon rectangle was not only added to the cover but it has become a fixture on the Wired cover to this day, and it’s teased mercilessly on the cover of the latest Wired magazine.

Had you noticed this little wrong design interloper? I had definitely always noticed it, but I had not processed it as wrong, and had never questioned it. Which goes to show that if you repeat something wrong often enough, people begin to believe it, and it becomes right. Miles Davis famously could make any wrong note in his improvisation “right” by resolving it harmonically. He became a jazz demigod for taking risks and for reinventing himself continually throughout his career.

Ultimately the most useful takeaway from the piece might be the idea that designers should use wrongness as a design strategy. (Client: “That tyepface looks totally wrong.” Designer: “Absolutely, do you like it?”) This should not be confused for careless or ignorant design, but instead we should be thinking about creating balance or unity in our work and then consider drawing a mustache on it. Considered that way, the visual trademark of the networked car sharing company Lyft couldn’t be more right—because it’s wrong: 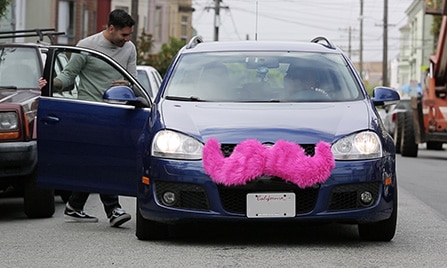